Advertisement
The Newspaper for the Future of Miami
Connect with us:
Front Page » Profile » Bo Boulenger: Heads operations of all Baptist hospitals, outpatient sites 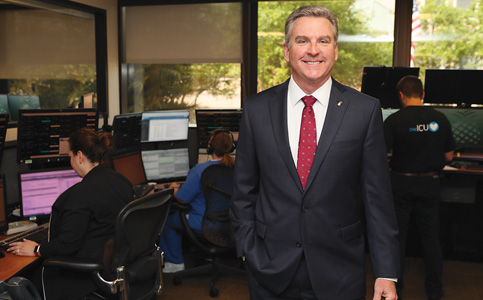 Only a few months into his new position as Baptist Health’s chief operating officer and executive vice president, Bo Boulenger says he is happy to be working his dream job: “this is all I’ve ever wanted to do and I couldn’t be happier doing it.”

Mr. Boulenger’s career was anything but an accident. From a young age, he knew he wanted to be involved in healthcare administration, and he has grown with Baptist Health over the past 33 years.

When asked what he is prioritizing in his new role, Mr. Boulenger said he hopes to maintain and build upon the infectious and warm culture throughout Baptist’s hospitals in South Florida. While growing Baptist Health’s footprint, Mr. Boulenger says, there is a delicate balance between maintaining the tried-and-true culture while still being open to adopting new technology.

The key to staying relevant in the industry and keeping patients coming back is consumer-driven care, he says. Baptist Health is committed to disrupting the healthcare industry and evolving to provide the best possible care at an affordable cost.

In the ever-changing healthcare industry, providers are struggling to maintain care while being compensated less. Mr. Boulenger says Baptist is working hard to lower costs while improving quality, not just maintaining it.

Mr. Boulenger says the healthcare industry is usually late to the game: barcodes were used at Publix before hospitals thought to use them to administer medications to patients more accurately. Baptist isn’t just trying to keep up, he says, but get ahead of the curve. Using evidence-based standards throughout all of Baptist Health hospitals and outpatient centers can help to reduce clinical variations, he says, driving better outcomes and reducing the cost of care for the hospitals and the patients.

Miami Today reporter Gabi Maspons interviewed Mr. Boulenger at the Baptist Health corporate headquarters in Coral Gables. The interview was recorded by Jahmoukie Dayle, and can be found Friday at http://bit.ly/2uNHy0Q.