Advertisement
The Newspaper for the Future of Miami
Connect with us:
Front Page » Business & Finance » Bombardier may move its Learjet servicing to Opa-Locka

Bombardier may move its Learjet servicing to Opa-Locka 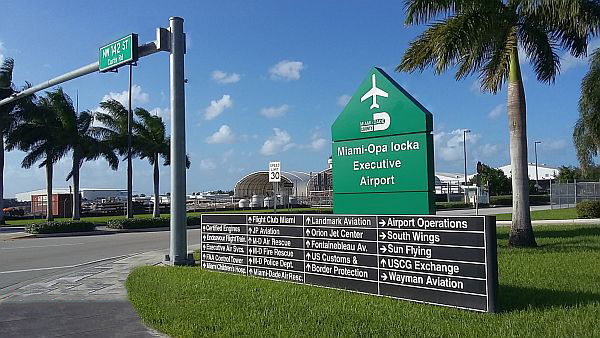 Canada-based aerospace manufacturer Bombardier may soon unveil a move of its Learjet service center from Fort Lauderdale-Hollywood International Airport to Miami-Opa Locka Executive Airport, bringing with it 150 full-time jobs and $15 million in public infrastructure upgrades.
Bombardier manufactures business jets. Nine service centers around the world serve Bombardier aircraft owners.
Bombardier’s lease on its Fort Lauderdale service center expires in 2020 and it is “exploring any opportunities to expand [its] footprint in Florida,” said spokesperson Anna Cristofaro.
Though the Miami-Dade County Commission on March 6 approved an allocation of $5 million from Building Better Communities bonds to the project, it’s unlikely Bombardier will ever get the money.
“There are several projects ahead of them that have to be negotiated and approved or rejected before Learjet can get the money,” said Leland Salmon, deputy director of Miami-Dade’s Regulatory and Economic Resources Department. “They have to wait and see if there is any money in the pot left for them.”
All $75 million in the Project 124 economic fund has been allocated. Four projects have already signed grant agreements with the county, totaling $23.5 million. The other $51.5 million is allocated to seven other projects, and there’s a waiting list.
Bombardier won’t get any money unless it’s freed up somehow, Mr. Salomon said. “The allocating doesn’t really mean anything. It just puts them in the process.”
“$18 million has to fall through and become available to be allocated to somebody else,” Mr. Salomon said. “I would say the chances are pretty slim.”
Still, Mr. Salomon said, he hopes Bombardier moves forward “because it’s a great project for Miami-Dade County and for Opa-Locka.”
“Unfortunately, my hands are tied,” he said.
The 200,000 square-foot maintenance center is to create 150 full-time jobs by 2020 with salaries averaging about $70,000. The project total is $75 million, with $15 million going toward public infrastructure improvements, a report from Mayor Carlos Giménez says.
The hub would offer painting, servicing and aircraft repairs, such as windshield replacements, fixing airplane lights and radios. It’s likely to attract “high net-worth individuals, Fortune 500 companies and their teams to the Opa-Locka area,” Mr. Giménez said in his memo. To account for the new traffic, Opa-Locka would need more hotels, restaurants and entertainment, which would help the area.
If the county’s $5 million is freed up, the money would go toward public car parking, public aircraft parking, site fire protection and site storm drainage, the memo says.
Though Bombardier is still in the exploratory phase, Ms. Cristofaro says plans are “quite advanced” and the company must decide this month whether to renew its Fort Lauderdale lease or move its service center to Opa-Locka.
“The preferred option is to sign a lease … to relocate the service center,” said Bombardier CP and General Manager of Customer Experience Jean-Cristophe Gallagher in a letter.
Ms. Cristofaro says Bombardier will be announcing whether the service center is to move “imminently.”