Advertisement
The Newspaper for the Future of Miami
Connect with us:
Front Page » Communities » Macy’s site on Miami Beach under sale contract 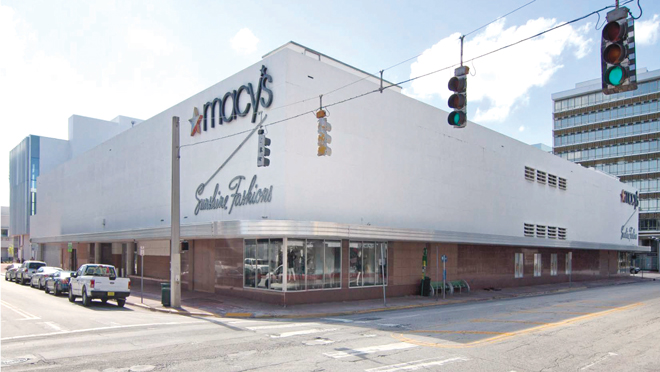 Sale of the Macy’s department store site on Miami Beach is currently in process. The site is under contract, with Marcus & Millichap commercial brokerage managing the sale.

Details of who the buyer is and for what price have not been disclosed because official sale documents are still being processed.

“We’re under contract,” said Scott Sandelin, a national retail group specialist for the firm. “If all goes well, the contingency period will be waived and within the next couple of months the property sale will be closed.”

“Many of these types of leases were done about 100 years ago or 75 years ago that still sit in the marketplace today,” Mr. Sandelin said. “I guess they didn’t consider how things would change in dollars and values over time, and so today the tenant, who is Macy’s, who owns this lease is paying extremely low rent, and they pay all expenses on it, but their net rent is extremely low.”

In January, Macy’s announced that its historic building on Flagler Street in downtown Miami was closing as part of some nationwide planned store closures. While the downtown Miami location is in the process of closing, the Miami Beach location will continue to be open, according to Jacqueline King, manager for South media relations for Macy’s.

In terms of how the site was marketed, Alex D’Alba, a senior Marcus & Millichap associate, said a database as well as networking were used to find clients.

“We have a very vast database that mixes and combines institutional clients, as well as high net worth individuals, and that’s a database that has over 15,000 clients,” he said. “We market very specific clientele that we believe would have interest in this that would understand the land value in it.

“It’s 50,000 square feet roughly of CD-3 zoning in Miami Beach, which is caddy corner to the convention center. It could be a hotel, retail, mixed use or even parking, but obviously there’s a long horizon out there since Macy’s does control the property for another 33 years. But then again, Macy’s is a single tenant holding 100,000 square feet.”

While Macy’s has a 99-year lease, Mr. D’Alba said long leases like this weren’t uncommon in the 1950s, especially when clients were large companies.

“It’s common for a big box retail company to have leases that allow them to expend up to 40 years and sometimes past that,” he said. “In this particular case, there was a ground lease. When this lease was done, there was no construction on site, it was just a piece of dirt, so the property was built, and back then it was much more common for these type of leases to exist.”

Earlier this year, when the site was still for sale, Mr. Sandelin said there was “significant interest in the property.”

“We received interest from owners and developers around the country, each with their own idea of what to do and how to monetize the investment should they be able to purchase it,” he said. “We had several offers prior to it being under contract.”

Although the site is currently under contract, Mr. Alba said backup offers are still being taken.

“We do still have interested parties that are in line waiting to see what happens,” he said. “By no means is this a done deal.”