Advertisement
The Newspaper for the Future of Miami
Connect with us:
Front Page » Real Estate » 92- to 100-story downtown tower work to begin next year

92- to 100-story downtown tower work to begin next year 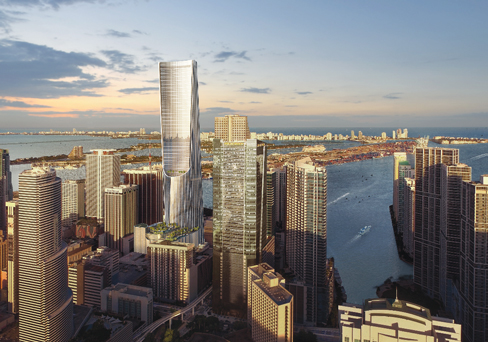 The building at 1,049 feet above Biscayne Bay would be the tallest in the area with 360-degree, panoramic views and over 3 million square feet of office, residential and hotel space.

“We are starting to put our tenants on notice about our intent to demolish the building,” said Jerome Hollo, manager of Florida East Coast Realty. “Sometime by the second or third quarter of 2019 is when the leases will end and at that point we’ll look to demolish the existing building and start a new project.”

Once the building has been evacuated, a building permit will be needed from the city.

“We’re in the process of preparing our construction documents, which will be submitted for permit, and once we receive the city’s building permit we’ll start the construction of the new building,” Mr. Hollo said.

Initially, the new project was supposed to comprise of two towers with 4 million total square feet, but as planning developed further Florida East Coast decided to go with a singular building.

The company has started reaching out to retailers and businesses for tenants.

“We have commenced discussing with people, but we’re still a little far out now,” Mr. Hollo said. “We wanted to put it in front of the larger out-of-market companies that are out of the area, though.”

In terms of completion, Mr. Hollo said the company has predicted it will take four years of construction, with the new tower completely done sometime in 2023.

“It’s a wonderful plan and it will really be an iconic landmark for the city,” Mr. Hollo said. “We’ve actually been talking with FDOT (the Florida Department of Transportation) and the county to connect by a bridge to the peoplemover station that’s adjacent to our project. This will help our people that are living and working in the building to easily use the city’s circulator system.”