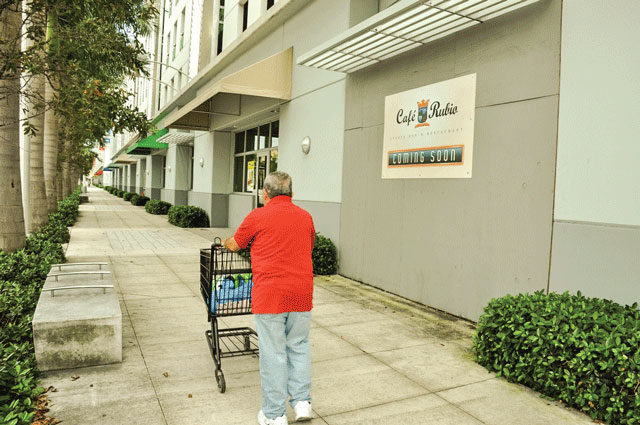 There is renewed interest in leasing the retail spaces in the city-owned parking garages hugging Marlins Park in East Little Havana, and the latest tenants to sign on have brought current occupancy to 75%.
Vacant space under lease negotiation, if successful, would raise occupancy to more than 84%.
The positive news is included in a January activity report delivered to Miami city commissioners this month, prepared by NAI Miami.
The commercial real estate agency is under contract with the city to handle leasing of the 53,281 square feet of ground floor retail.
What is referred to as the Shops of Marlins Park, the retail spaces are street-front spots along Northwest Seventh Street and plaza retail wrapping around the main entry plaza to the ballpark, in three of the four garages.
The Miami Parking Authority operates the garages under the direction of the city’s Off-Street Parking Board.
The activity report shows brand new interest in the spaces, and current leaseholders considering additional space.
The latest tenants include NightLife Brewing Co. and Casablanca at Marlins Park. The microbrewery opened in 2017 facing the main pavilion of the ballpark in the Home Plate Garage, known as P1 at 1588 NW Seventh St.
Casablanca is to bring its seafood to an 8,000-square-foot space on Seventh Street.
A construction update in the latest report shows Casablanca in the process of creating architectural and engineering plans for permitting of the new venture. The tenant also has locations at 404 N River Drive and 1717 N Bayshore Drive in the Miami area.
The January report mentions the prospect of a cigar and tapas bar for the 3,196-square-foot space remaining unclaimed in the Home Plate Garage. The interest is from business partners in Palm Beach County with restaurant experience, including ownership of five Zaxby’s restaurants.
The partners have restaurant and entertainment venue experience, and have shown “strong interest” in the space, according to the report.
The 3,196 square feet was originally leased to Café Rubio, a Latin restaurant and sports bar, but the deal fell apart and the parking board approved a termination of lease agreement in May 2016.
Café Rubio never opened there, but about $400,000 worth of interior improvements were made in preparation for a restaurant use.
The activity report says NightLife Brewing is also interested in leasing the 3,196-square-foot space “for a moderately priced tapas-style restaurant to complement the microbrewery.”
The company’s current focus is the brewery’s start-up operation, the report says.
Another current tenant, Wellmax, has signed a letter of intent to expand by about 5,000 square feet for a wellness center in the P3 garage, which sits at the southwestern corner of the ballpark property.
The biggest tenant, Wellmax currently leases 14,000 square feet in the P2 garage.
Wellmax Health Delivery Network LLC, a Florida company doing business as Wellmax Medical Centers, moved into the commercial space at 1422 NW Seventh St. in April 2016.
The company operates a primary care medical clinic, general offices and administrative space from the P2 garage.
In regard to Wellmax possibly expanding its services, the activity report says: “The revisions include utilizing a travel path to transport clients between the two facilities through the Marlins’ controlled plaza area. The Marlins have conceptually agreed to allow Wellmax to use this path, subject to limitations during game time and major events hours.”
A sublease addendum is being drafted, along with a draft letter agreement between the city and the Marlins reflecting the terms and conditions of the tenant’s use of the travel path, according to the report.
The report also mentions interest from cell phone company Metro PCS in opening an expanded corporate flagship store of about 2,000 square feet in the P1 garage. Other tenants at the garages include a Subway restaurant, and Fresenius operating the Dade Dialysis Center.
It has been a struggle to secure tenants for the commercial-retail space in the garages, built by the city around the county-owned stadium, which opened in 2012.