Advertisement
The Newspaper for the Future of Miami
Connect with us:
Front Page » Government » County waives competitive bids to manage Underline 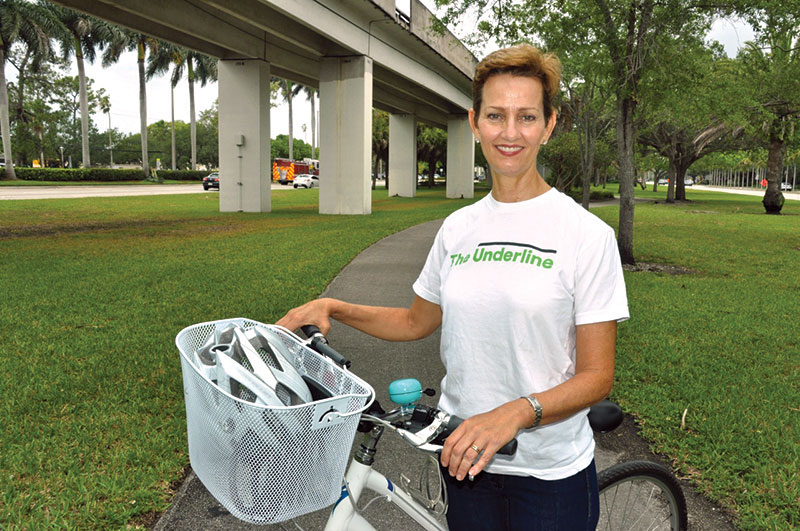 Miami-Dade commissioners expedited the creation of the Underline this week by voting to waive competitive bidding procedures to grant The Underline Management Organization Inc. full responsibility to manage the right-of-way under the Metrorail.

“We complain a lot about how green spaces are not properly taken care of and it is an honor and a privilege to sponsor this item because it will make our community better,” said sponsoring commissioner Jean Monestime.

Joe Martinez was the only commissioner with reservations about the legislation waiving the competitive bidding requirement.

Mr. Martinez asked the percentage of the population that lives within the area of the underline.

“The passion and knowledge they display is beyond,” Mr. Martinez said, “but I am concerned about the cost.”

Ms. Daly said the ten miles would cost about $100 million and county would be committing to about $6 million.

Mr. Monestime pointed out that the county is by no means the prime investor in the linear park.

The county is to pay $35,888.26 per mile per year for the maintenance of the Underline, while the overall cost per mile is about $10 million.

“The county is putting a minuscule amount of the money and that’s why I took interest,” Mr. Monestime said. “It’s a wonderful vision they have put together. They have raised the funds and if their creation falls into the hands of others, the focus is lost.”

Mr. Monestime said he usually doesn’t support these types of items, but the Underline is an exception.

“When it comes to waiving competitive bidding, I usually don’t associate, but as a first-class city we have to make first-class decisions,” Mr. Monestime said.

The legislation waives all competitive bid procedures on the underline, granting The Underline Management Organization Inc. the right to manage, operate, maintain and serve as the county’s marketing partner for the linear park, the legislation says.

Mr. Monestime said the Underline mirrors many other “great cities” that have created linear parks and this is the one of many steps to keep the county green for residents and visitors.

The Underline is not only a resource to county residents, Mr. Monestime said, but will also become a “green oasis” that attracts tourists in the future.

The Underline consists of “improvement and programming” for the 10-mile corridor within the Metrorail right-of-way from the Miami River north of the Brickell Metrorail Station to the Dadeland South Metrorail Station.

The legislation says that the Underline will create a “heavily landscaped, attractive recreational amenity underneath the elevated guideway of the Metrorail.”

The concept of creating a green linear park under the Metrorail is not novel, but was conceived when the Metrorail was first developed, the legislation says.

The Underline is to enhance the bicycle and pedestrian pathway, add native landscaping, lighting, signage, drainage and recreational facilities. It is also to have amenities and recreation-related concessions, the legislation says.

Commissioner Dennis Moss waived his hands in support of the legislation.

“To me, aesthetics are important,” Mr. Moss said last month. “We keep saying we want to be a world-class community, but we look like a third-world country because we don’t maintain our roadways and major gateways.”

Mr. Moss has long been a defender of creating more green spaces in the county and thanked Ms. Daly for “being a champion” of the underline project.

Commissioner Bruno Barreiro expressed his support for the Underline, saying the impact figures are conservative.

“I have to believe that the residents affected are well over 100,000,” Mr. Barreiro said. “The population in this corridor is growing and the figures are changing.”

The need for the park is clear and it is “crucial” that the county stay actively involved throughout the project, Mr. Barreiro said.

Commissioner Jose “Pepe” Diaz said the Underline is “huge” for Miami-Dade County and will become a resource for all residents.

“Everybody has participated in making this happen,” Mr. Diaz said. The City of Miami has contributed $50 million and the Underline continues to lobby for more money, he said.

Commissioner Sally Heyman said that the Underline is not only aesthetically beneficial to the community, but also enhances mobility and connectivity.

“It’s not your usual bicycle trail, but has many features and activities that will make it a world-class destination,” Ms. Heyman said.

Ms. Heyman said her husband was recently struck by a hit-and-run driver while cycling and was lucky to have only hurt his arm.

“We have one of the highest rates of pedestrian bicycle deaths in this country,” Ms. Heyman said. “It’s expensive because it’s important.”

Stuart Blumberg, director emeritus of the Performing Arts Center, advocated for Ms. Daly, quoting her father, who passed away this year:

“Parker Thomson [Ms. Daly’s father] stood at this podium with me while we talked about the vision of the Performing Arts Center. He said, ‘if you dream it, you can do it and if it’s easy, then it’s not worth it.’ Here Meg is 26 years later and she’s dreaming it and she can do it,” Mr. Blumberg said. “This is an unbelievable project for the county and a legacy that will last forever.”

The commissioners unanimously passed the legislation, granting the Underline Management Organization the right to manage, operate, maintain and serve as the county’s marketing partner.

One Response to County waives competitive bids to manage Underline