Advertisement
The Newspaper for the Future of Miami
Connect with us:
Front Page » Real Estate » Board OKs 688 Little Havana rentals on Miami River 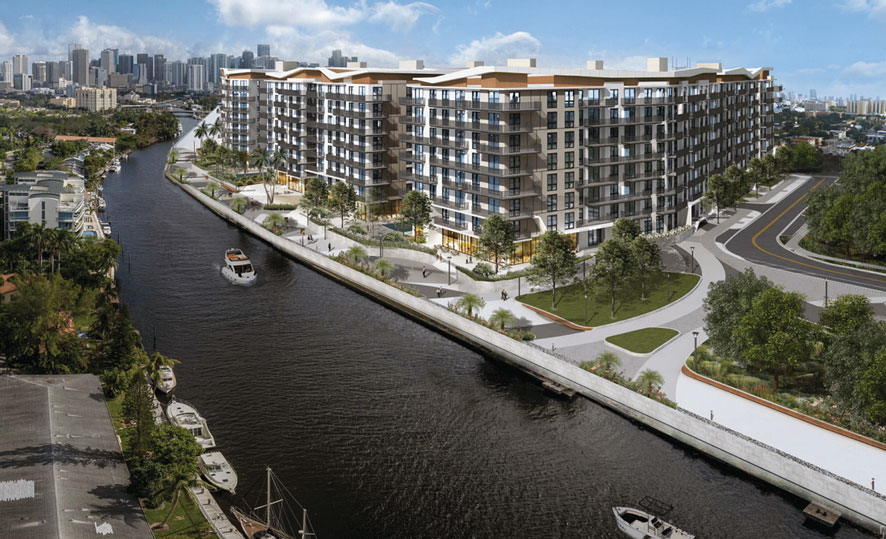 The plan to build nearly 700 apartments on vacant land in East Little Havana near a bend in the Miami River has garnered approval from a city review board.

Mast Capital hopes to have a groundbreaking within 10 months on the large mixed-use residential project to be called Miami River Walk.

The city’s Urban Development Review Board last week recommended approval of the project, with a couple of suggestions to the developer’s team.

The project includes about 688 residences in two buildings, with parking for at least 780 vehicles, and a modest corner of commercial/retail space of 2,795 square feet.

And while the proposed development is large, coming in at about 945,239 square feet, it’s less imposing than a previous project approved for the site but never constructed.

The 6.3-acre site at 1001 NW Seventh St. is on the south bank of the river, just east of the Northwest 12th Avenue Bridge, and Spring Garden is across the river on the north.

The city approved more than 740 dwellings in two 27-story residential towers for the site about 15 years ago.

A company called Royal Atlantic got a special use permit to build the sprawling project and marketed it as Rio Miami, but it was never built.

A site plan by Corwil Architects shows the project coming in two phases, with the west building rising first.

“We are leaving both density and intensity on the table,” Carlos Lago, an attorney for the developer, told the board.

He said the project will include more than 1,000 linear feet of waterfront improvements including a new seawall and an extension of the public riverwalk, with landscaping, lighting and seating.

Mr. Lago said the layout of the buildings will include four connector points for public access to the river.

Each building is to have an internal seven-story, 400-vehicle garage. The zoning code requires 1,125 parking spaces, but the developer is seeking a waiver of up to 30%, allowed for projects near public transit.

The project is to have more than 20,000 square feet of amenities, including two swimming pools and courtyards, a business center, game room, fitness center, and 1,000-square-foot theater.

Miami River Walk will offer rental units from studios up to three bedrooms.

The architect told the review board the design will have a “marine feel,” with lines hinting at the silhouette of ships.

Some board members liked that idea and encouraged even more nautical accents to the project, from designing balconies with the flair used on cruise ships to maritime flagpoles in the courtyards and more.

Board member Gerald Marston asked if there were plans for dockage along the river’s edge, or tie-ups for recreational boaters.

Mr. Lago said the developer researched the history of the site and found no permitted dockage or marine uses and has no plans to seek marine operating permits from the county.

Mr. Marston and other board members suggested they pursue that use, for pleasure boaters to be able to tie up to cleats on the new seawall.

“It would be a wonderful enhancement to the riverwalk,” Mr. Marston said.

The condition says if the developer-owner ever does seek a marine operating permit for that site, it must present the application to the river commission.

Board member Dean Lewis said he wanted more variety in the design, and perhaps a different layout for the parking levels and courtyards.

Board member Ignacio Permuy had a different view, saying he liked how the mass of the buildings was broken up by design elements.

“It’s going to be a great addition to this area,” he said.

The plan includes public pathways to the riverfront from the on-road greenway on the west and east side yards.

On the west, the site abuts Miami-Dade County land that’s leased to New York fashion designer Naeem Khan, who plans a design studio and vocational school of fashion there, along with a new section of improved public riverwalk.

A connection with Mr. Khan’s site is part of another condition from the river commission.

It reads, “Provide the public Riverwalk’s western seamless connection with the adjacent planned public Riverwalk continuing west along the Naeem Khan/Miami-Dade County site, at the same elevation, etc., as depicted in the presented plans.”

Other conditions from the river commission include:

■Communicate and coordinate with the adjacent City of Miami Fire Department and Homeland Security Facility.

■Owner shall provide a 15-foot-wide public greenway bike/pedestrian path along the eastern boundary. The initial site plan had less than a 10-foot-wide open pathway, and river commission members lobbied for more.

■Owner shall remove a sky lounge from the project.

■Owner shall designate the enclosed areas along the promenade connecting Northwest Seventh Street to the riverwalk for non-commercial uses.

■The riverwalk must be completed prior to the issuance of a temporary certificate of occupancy, or in the event of a phased project, a temporary public riverwalk for the portion abutting the unbuilt phase shall be provided until all phases are compeleted.

■There shall be no outside alcoholic beverage sales.

■Between 11 p.m. and 7 a.m., there shall be no operation of any radio, phonograph or other mechanical sound-making device or instrument, or reproducing device or instrument, or in the playing of any band, orchestra, musician or group “where the noise or music is plainly audible at a distance of 100 feet from the property.” This is taken from the city noise ordinance.

■The owner or tenant shall provide actual notice of any future warrant or exception to all Spring Garden property owners abutting the river.