Advertisement
The Newspaper for the Future of Miami
Connect with us:
Front Page » Real Estate » Components of vast Miami Worldcenter coming together 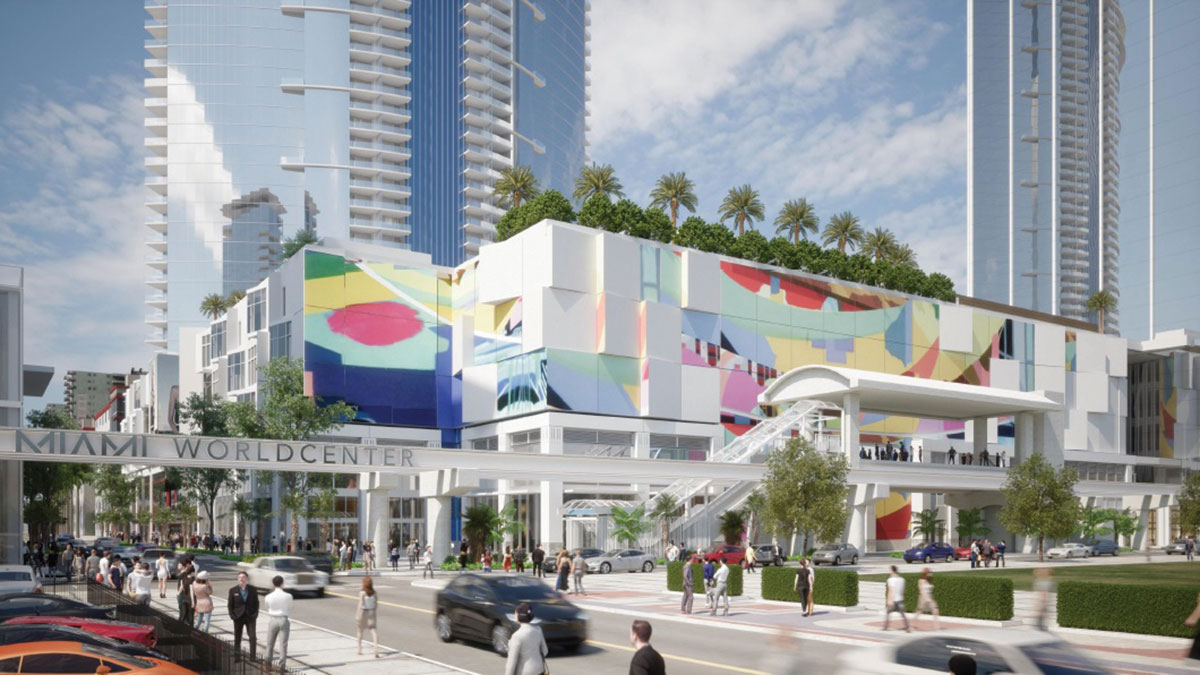 The vast components of the sweeping Miami Worldcenter project are coming together as residential towers rise and plans for a 330,000-plus-square-foot shopping venue are being finalized.

A team representing developers Miami Worldcenter Associates LLC met with the city’s Urban Development Review Board recently with proposed façade changes to a large parking structure and the selection of a key artist who will add his signature painting to the mixed-use project.

The board makes recommendations to the planning director.

A motion to recommend denial of the changes to what’s labeled as Miami Worldcenter Block D East died on a tie vote of 2-2.

A motion to recommend approval of the changes, with conditions, passed on a vote of 3-1, with acting chairman Dean Lewis voting no.

The two conditions require the developer to meet with the planning director and show elevations for the garage before and after changes were made to make the structure appear less top heavy, and to explain why the design has been simplified. Also, the specific artwork to be displayed as part of this portion of the development next to the Metromover station must come back to the board for review.

“We’re happy to do that,” said attorney Ryan Bailine, representing the developers.

Worldcenter is a collaboration of Miami Worldcenter Associates and a team of development, design and engineering firms. The entire development promises a mix of residential towers, hotels, retail stores, restaurants, entertainment venues and a convention center to an area hugged by AmericanAirlines Arena and All Aboard Florida’s MiamiCentral train station.

Miami Worldcenter is billed as a $2 billion project out to transform 27 acres of Miami’s urban core in the Park West neighborhood.

A major component of the long-awaited project is its proposed shopping center, initially designed as a massive indoor mall, stretching from the FEC railroad tracks northward to Northeast Tenth Street.

The new retail plan, being called “high street retail,” is a shadow of its former self.

The original plan called for 1,090,771 square feet of commercial space. The new plan sets aside less than one-third as much, about 338,036 square feet.

The reasons to appear before the review board were changes to a façade on a parking garage and the selection of an artist and the location for murals as part of Block D East.

In a letter to a planning official, Mr. Bailine said the planning and zoning department approved a warrant authorizing the development of the project’s initial phases on Dec. 30, 2016.

“As we discussed with you and your team over the past several months, MWC has been reviewing proposals from several world-renowned artists to partner with on signature art pieces of various mediums to be featured within the Project,” he wrote. “We are pleased to submit this letter detailing the selection of an initial artist, Franz Ackermann, together with details on the art installation, as well as details on further façade refinements.”

Mr. Ackermann is a German painter and installation artist. His work has been featured worldwide, including at the Tate Museum of Liverpool, the Venice Biennale, and the Museum of Modern Art in New York, said Mr. Bailine.

“This is an exciting opportunity for Mr. Ackermann’s unique and cutting-edge work to be displayed prominently in the City of Miami, for all to experience. His works are regarded as ‘riveting’ abstraction, and include a wide array of colors, shapes, and textures,” wrote Mr. Bailine.

Mr. Ackermann’s work will have a prominent location within the project, on the block referred to as D East. The artwork will be displayed on the east façade, chosen for its location along the Metromover line. More specifically, the artwork is designed to capture the attention of Metromover riders as they interact with the Park West Station.

The board was provided with updated plans for D East, detailing the location of the artwork on the façade, and a statement regarding the long-term maintenance of the artwork.

The colorful renderings presented showed examples of where the painted artwork will be displayed, but not the actual images, representatives of the developer pointed out.

In addition to the artwork on the east, the developer proposes further refinements to the D East façade program, said Mr. Bailine.

On the south and east, the developer plans an integrated projected panel system, with a three-dimensional, rotating appearance that wraps the corner from the east to the south.

On the north, the artistic metal fin system that originally spanned only the upper levels was extended to meet the ground level.

The team also presented the city with its art maintenance plan, which calls for Mr. Ackermann to personally maintain the installation for a minimum of five years.

“Original paint will be stored on-site for easy access. Standard, ready-available paint colors will be utilized for ground-level portions of the Installation; i.e., areas more susceptible to general wear and tear,” the memo says. “The upper portions of the Installation may utilize specialty paints … the Installation will be formed from an inter-locking panel system, with each panel having a unique identification number … All paint shall be certified for external use, with special consideration given to UV, rain, and salt exposure.”

Some board members voiced concerns about the lasting power of the artwork, which is basically paint on panels. Some preferred an art structure vs. a painted wall.

Mr. Lewis voiced a preference for a more permanent art installation; that has the integration of architecture with color. He cited the example of garages built on the south end of the Design District with artistic façades. “He went for an architectural solution,” Mr. Lewis said of the designer of the multi-level garages.

Mr. Bailine stressed the importance of the upkeep of the artwork. “It would be a disincentive and irrational not to maintain it,” he said.

2 Responses to Components of vast Miami Worldcenter coming together