Advertisement
The Newspaper for the Future of Miami
Connect with us:
Front Page » Top Stories » Co-working spaces expanding as membership increases 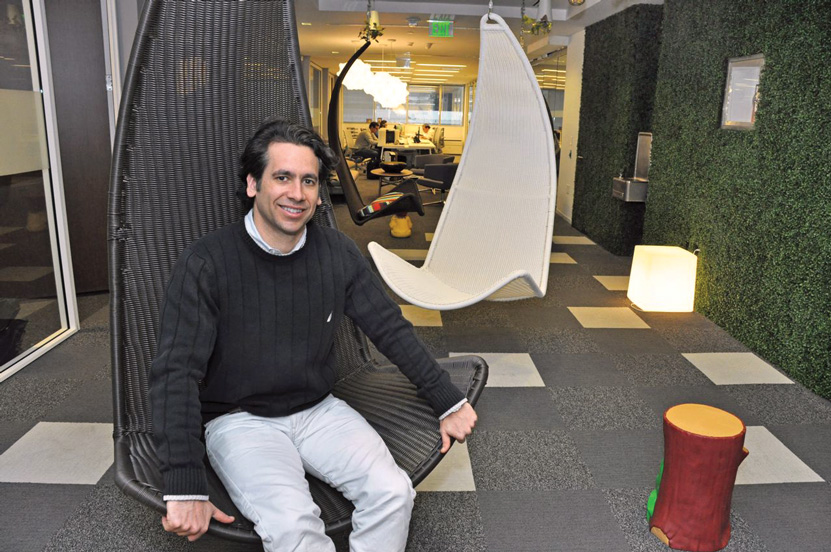 Founders of Miami-Dade co-working spaces are looking to expand as membership increases and more professionals utilize shared workspaces as launch pads to success.

Adolfo Taylhardat founded TamboWorks three years ago alongside two friends when they shared the same dream.

“We got tired from working at home,” he said. “We were looking for an option where we could have a more productive space, where we would be connecting with people.”

He and his TamboWorks co-founders found what they needed in the 3,000-square-foot workspace at 5790 Sunset Drive that spreads across the second floor of a two-story building that includes a patio.

The space provides a variety of amenities. All members can utilize ’round-the-clock access, conference rooms and phone booths. The organization offers three packages: the chance to move freely around to any open space, a designated desk, and a private office. Mr. Taylhardat chooses to work from a designated desk to be easily accessible to his 28 members.

Nathalie Ponak, the managing director for Acadomia Florida, a tutoring service, finds that the TamboWorks workspace is ideal for her type of business.

“It’s a seasonal business,” she said. “This allows us to have a lower rent during the summer as opposed to having our own building, where we would have to pay for everything all the time.”

Ms. Ponak and a colleague serve students primarily from the nearby international schools. The team uses another co-workspace in North Miami to assist students in the Biscayne North community.

If Acadomia continues to expand, Ms. Ponak sees the benefit in renting another shared workspace. “People are everywhere,” she said. “People in Downtown don’t want to come here. The driving is so long. It’s better to have multiple offices than one big one.”

Kristopher Roth, an analytics and benefits consultant for Lumity, finds he can be more productive at places like TamboWorks. Mr. Roth admits that as a father of four he could rarely focus at home. In the past two years, he finds that drifting from one workspace to another alongside other professionals helps him concentrate better. “It allows me to have a little more of a routine and a schedule.”

“My kids thought that I had time on my hands,” Mr. Pinzon said. “They thought at a drop of a hat I could take them to school, pick them up, drop them off to meet friends. It’s as if they thought I was on vacation.”

For two months Mr. Pinzon tried to work from his home office and ultimately decided to work from TamboWorks. As a former attorney, he cut his two hour-long commutes to and from work out of his schedule. He can easily walk or bike to the office.

He feels more productive in the past three months since working from a designated desk. “Everything that I said I would be able to do at home, I’m achieving it here in co-working. It’s a huge difference,” he said.

Dvdendo app CEO and co-founder Gabriel Montoya said he can efficiently help his company grow every month from his private office on the third floor of Pipeline Coral Gables at 95 Merrick Way. His company, helping the everyday user make savvy investments, went from 50 app customers in 2016 to 15,000 in recent months.

Pipeline offers amenities similar to TamboWorks. Members choose from four plans, varying from the most basic package with access to conference spaces and a professional address to private suites. The company offers members existing locations in South Florida and an office in Philadelphia. Members can utilize conference rooms and meeting spaces in any of the locations.

Pipeline co-founder Philippe Houdard said, “Demand continues to be very high for our space, and so we continue to expand. Shortly we’ll be opening up Pipeline Orlando, and we have more spaces following. As we expand into new markets, it makes the Pipeline network stronger, with more companies joining our community.”

Brendan Fitzgerald emphasizes that every minute counts when launching a new business and shared workspaces help professionals make better use of their time. As the managing director of Pomodoro Stories, Mr. Fitgerald manages the acquisition, representation and sale of scripts from overseas for viewers in Europe and the Americas.

“Everybody in order to survive is becoming more entrepreneurial,” Mr. Fitzgerald said. “Part of being an entrepreneur is figuring out what you are good at and how to spend as little time as possible on whatever is not drawing you to your bottom line.”

Since moving to Pipeline, Mr. Fitzgerald has expanded his team of two to include a third member. He credits the flexibility of collaborating from a shared workspace as the key to Pomodoro’s growth.

Needslist Community Director for Disaster Relief in Puerto Rico Alana Matos went from zero partners to 12 within a month of moving to Pipeline. Her ability to focus increased dramatically with the designated phone booths and access every day, every hour.

A native of Puerto Rico, Ms. Matos left home in September and secured 15 non-profit partners to help the island get back on its feet thanks to having a place from which to work.

Partners in the co-workspace sector look to expand as they see demand grow. While Mr. Houdard and his partner at Pipeline add their sixth location in Orlando, Mr. Taylhardat also hopes to expand TamboWorks with a second location in an area like Pinecrest or Kendall with double the space in the future.