Advertisement
The Newspaper for the Future of Miami
Connect with us:
Front Page » Government » Dolphin Station Park & Ride to be done by March

Dolphin Station Park & Ride to be done by March 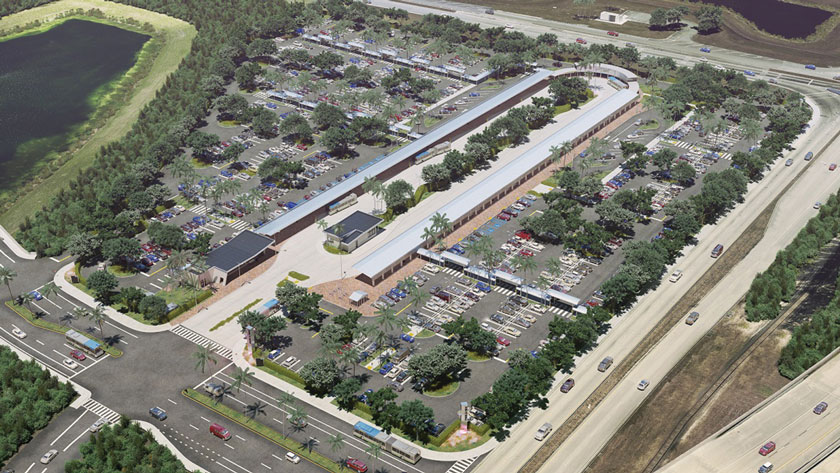 “The park-and-ride facility will be used primarily for our express bus service from the Dolphin Park & Ride station, which is approximately on Northwest 122nd Avenue and Northwest 12th Street along 836, using the shoulders we’re currently using as part of our capital improvement program,” said authority Deputy Executive Director and Director of Engineering Juan Toledo.

The lot adds an incentive for express bus riders to keep using the service and others to hop aboard.

County transportation chief Alice Bravo said of all east-west transit solutions to heavier traffic, the most affordable was utilizing the expressway’s shoulders.

“Every single highway has a shoulder, so that’s an opportunity to create an express bus service on every single highway at a very low cost,” she said. “All you need is the cost of the vehicles and the operations, and you have a mass transit solution. Rather than everyone being stuck in traffic, this vehicle is going to zip past everybody.”

The Dolphin Station Park & Ride is geared to entice more people to hop on.

Ms. Bravo said she believes the express bus service will increase in ridership with the park-and-ride lot despite an overall decline of nearly 10% she cited in overall bus ridership this year.

As a result of the decline, the transportation department cut service on some routes and expects more route changes in March to generate savings.

However, Ms. Bravo remains optimistic due to the 14% growth in use of the express buses running on the South Dade corridor from 2016 to 2017.

“While bus ridership overall is declining,” Ms. Bravo said, “you see that the express bus service is increasing because people want to save time.” She said amenities at the station will make public transportation even more appealing.

Dolphin Station work is 75% complete, Mr. Toledo said, and on budget. His team plans to finish by late March, with buses pulling in by summer.

“The bus service is contingent on the work they’re doing on the expressway since the plan is to put that express bus on the inside shoulders of 836,” Mr. Toledo said. He expects a promotional campaign to precede the opening.

The total project cost is estimated at $19 million, with $16.9 million of it construction. Mr. Toledo said DMT chipped in $5 million, the county tossed in another $5 million and MDX filled in the gap with about $9 million for the park-and-ride lot.

The area’s county commissioner, José “Pepe” Díaz, a long-time advocate, sees the Dolphin Station Park & Ride location as ideal. He said he believes the nearness of Dolphin Mall, Miami International Mall and the new Telemundo headquarters supplies commuters with a solution for their rising transportation demands.

“Business-wise, there’s a lot of business entities going in there and growing.” Commissioner Díaz said, “That means a lot of employees need to get there and leave from there. It’s a great place.”

Mr. Díaz looks towards nearby state-owned land with a vision of expanding the Dolphin Station Park & Ride in coming years. “As this grows,” he said, “there’s some other land that we’ll be looking at to try to build a parking facility to hold a lot more vehicles.”