Advertisement
The Newspaper for the Future of Miami
Connect with us:
Front Page » Communities » Mixed-use Miami Plaza tower moves ahead to join two others

Mixed-use Miami Plaza tower moves ahead to join two others 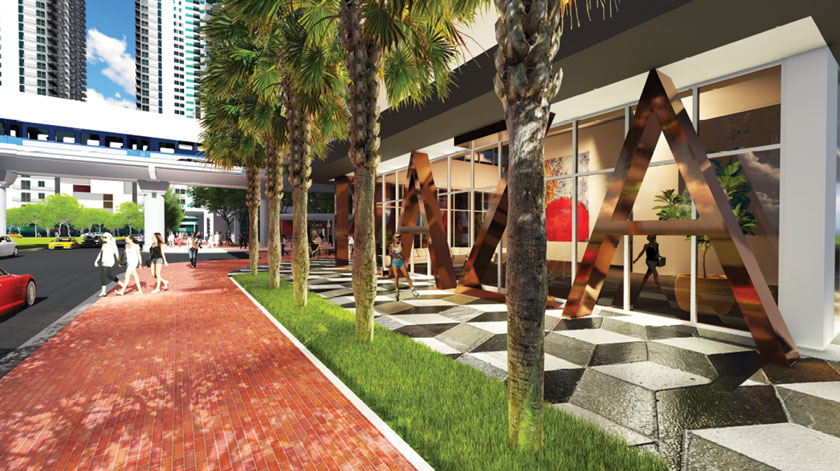 Better but still lacking. That was the consensus of a City of Miami review board evaluating the renderings and floor plans for a mixed-use tower to be called Miami Plaza.

The Urban Development Review Board on Dec. 20 was looking over fresh documents on the project, deferred with the developer’s approval in November.

Nearly all board members said the redrawn plans were an improvement from November but still incomplete.

On a split vote of 3-to-2, the board recommended approval of the project with conditions.

This came after board member Dean Lewis made a motion to deny the project due to floor plans inconsistent to elevations shown, but the motion was not seconded and died.

Mr. Lewis and board member Anthony Tzamtzis were the “no” votes on the motion to approve with conditions.

The review board makes recommendations to the planning department and planning director.

The other two projects rising near the School Board Metromover Station are Square Station and Art Plaza. All three are from The Melo Group, a family development company commended for building more affordable housing.

Miami Plaza is planned at 1502 NE Miami Place, just north of the Metromover station. It is designed as a single 36-story tower with 437 apartments and about 7,000 square feet of retail-commercial space, rising out of a large parking pedestal for more than 500 vehicles. The project is to have 14% dedicated workforce housing.

At their November meeting, board members said the plans for Miami Plaza appeared unfinished and incomplete, and some were troubled by the size, calling it “very massive.” Some complained about the color of glass being proposed for the tower, worrying it was too blue.

Board members also expressed a desire to see an overall plan for the area showing how the new towers differ from one another and how they relate to one another.

The project was deferred to give architects time to address those issues.

Attorney Iris Escarra, on behalf of Melo affiliates building the mixed-use towers, said the company intends to breathe new life into an area that has been underutilized for years, peppered with vacant lots and old parking lots.

As she did in November, Ms. Escarra again spoke of the overall plan for the neighborhood, looking at each project’s design elements viewed in “the big picture perspective.”

Each of the three towers is distinguished through different texture and design elements, yet the overall plan will offer connectivity for the growing area, she told the board.

She presented new architectural renderings of Miami Plaza, some showing Square Station and Art Plaza in the distance.

New renderings show the public plaza portion of Miami Plaza, and enhanced public spaces around the building and the Metromover station just across the street.

“The plazas are open and large, and not all the same,” she said. Wide pathways are a big component and will serve to “really activate” the area, making the Metromover station “almost a destination” itself because of the new adjacent uses and activities, she said.

Ms. Escarra also showed board members a sample of the glass planned for the tower, saying it isn’t deep blue but a lighter blue-green.

New renderings showed how designers tried to break up the mass of Miami Plaza’s tower by playing with the volume of balconies; staggering the pattern of the balconies and having different lengths and widths.

Ernesto Morales, with itec design, said the firm thought the board’s comments about breaking up the mass of the structure was good advice and adjusted the balcony size and placement.

That’s fine, said board member Neil Hall, but the problem is the changes weren’t on the floor plans.

Mr. Morales said they weren’t to that stage yet but, “we will update the floor plans.”

In regard to Miami Plaza, Mr. Lewis said he has an issue with the way the parking pedestal connects to the tower.

“It’s kind of forced together,” he said.

Ms. Escarra said the idea was to try and hide the parking podium or pedestal by tucking it behind the tower.

“This is significantly better than the one presented a few weeks ago,” he said. “You’ve done a lot of work and it shows.”

Mr. Hall and Mr. Lewis said they still wanted to see more in the presentation to spell out how the three projects will relate to one another.

“It’s important to see how they are related, as urban space and architecture,” Mr. Hall said.

Mr. Lewis initially made a motion to continue the matter for another month so the applicant could “clean up” the plans, but planning staff reminded the board any deferral has to be with the consent of the applicant.

It was then that Mr. Lewis made the motion to deny, which was not supported.

Board member Gerald Marston made a motion to recommend approval with conditions; present the planning director with coordinated plans where elevations match the floor plans, and provide a model of the area showing the context and relationship of the three towers.

The developer is asking for seven waivers on Miami Plaza, including: up to a 30% reduction in required parking spaces, allowed by code for sites near public transit; a decrease to the minimum drive aisle width from 23 feet to 22; and allow up to 10% increase of the maximum floorplate above the eighth story from 15,000 square feet to 15,954.

The board recommended approval of Art Plaza in November.

Art Plaza, to rise at 58 NE 14 St., is designed as a pair of 36-story towers offering about 655 residential units and about 15,000 square feet of commercial-retail space. Parking would be in a pedestal level hugged by the two towers and designed for more than 880 vehicles.

Construction is ongoing on Square Station, the twin 34-story towers built to a connected pedestal providing 946 parking spaces, along with about 15,000 square feet of commercial-retail space. There will be 355 apartments in each building.

Melo is to designate a percentage of dwelling units in each building for workforce housing.