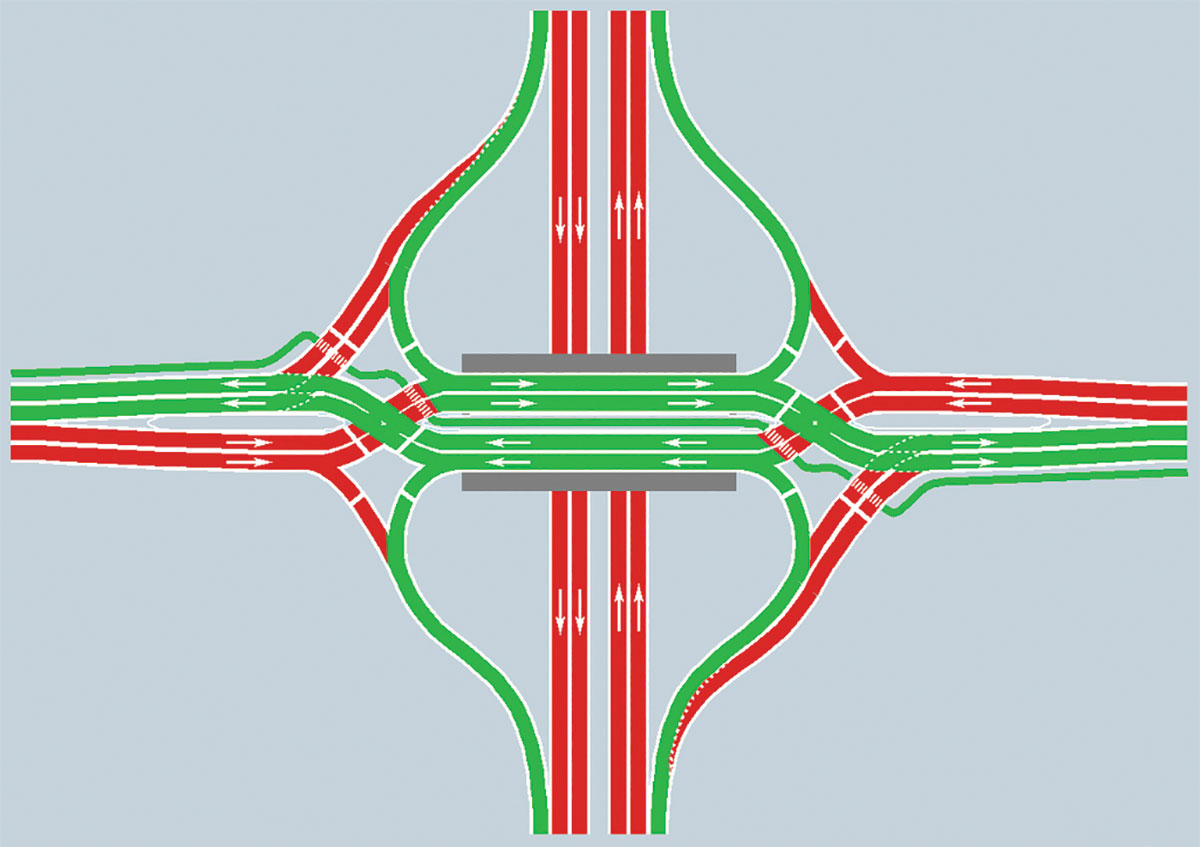 The Miami-Dade Expressway Authority (MDX) plans to debut South Florida’s first diverging diamond highway interchanges – which for short stretches have drivers cruising down the left side of the road rather than the right – by late April or early May on Northwest 27th and 57th avenues at State Road 836.

The authority’s Deputy Executive Director and Director of Engineering Juan Toledo says he  expects to launch a public awareness campaign of the innovative traffic patterns in February as construction continues.

MDX includes the diverging diamond project in its $799 million improvement plan for State Road 836. The upgrades, which date back to 2005, are being funded by toll collections.

The South Florida debut of the diverging diamonds will force drivers to drive momentarily on the left instead of on the right. Mr. Toledo said he plans to oversee a public awareness campaign costing about $20,000 to educate the public on how to drive responsibly when approaching one of these two interchanges.

Staff from nearby hotels said the construction may increase reservations despite presenting some inconveniences. Businesses in the area and Mr. Toledo agree that the temporary setbacks are worth the long-term benefits that the diverging diamond model offers.

Mr. Toledo describes the model as efficiently moving traffic. He said drivers move to the left when approaching the interchange in a free-flow movement into and out of the expressway. The plan focuses on north-south movement and, as a result, separates traffic with less chance of collision or congestion. The model also makes it easier for the driver to make U-turns.

“It gives you more time to clear traffic through the interchange,” Mr. Toledo said.

The diverging diamonds on Northwest 27th and 57th avenues include pathways protected by barriers at street level for pedestrians to cross through the interchange.

“You’re doing it in conjunction with the traffic signals,” Mr. Toledo said, “It’s all done in a safer mode.”

He plans to inform drivers about the changes in an extensive public awareness campaign two and a half months prior to the opening.

“Sometime in February,” Mr. Toledo said, “we would start the campaign, and that would consist of newspaper ads, radio, TV. We have videos that educate drivers on what to expect when they come through the interchange either exiting or entering the expressway or if you’re on the local road.”

The campaign will reach Creole, English and Spanish-speaking locals. The campaign budget is about $20,000.

“If we need to put more money into it, we will,” Mr. Toledo said. “We want to make sure that people are educated so that they drive through this area cautiously and safely. The first time you drive through it you want to avoid confusion.”

The MDX team continues construction work and anticipates closures over the next few months. Mr. Toledo said workers are currently preparing exits and entrances to allow for this new configuration. Intermittent closures should be expected closer to the spring.

“Over the next two to three months,” he said, “you’re probably going to be seeing closures at the entrances and exits of the ramp. It’ll go on until we open it.” MDX plans to close entrances and exits when traffic flow typically declines during the evenings and weekends.

Hotels near the construction site don’t expect the ongoing project to slice into business as they enter their high season from January through April.

“It sometimes benefits us because we do get business from venders that participate in the construction and they might stay at our hotel,” she said.

She said reservations at the hotel, at 777 NW 57th Ave., increase on average by 28 to 65 room nights per month with nearby construction.

Hotel guests could expect minor inconveniences, according to Sara Bravo, the director of sales at the Hyatt House, 5710 Blue Lagoon Dr.

Ms. Bravo said the nearby diverging diamond interchange project in conjunction with other street improvement plans might cause unwanted nighttime noise. She also said that Hyatt House might need to change its shuttle routes if the diverging diamond project, in concurrence with other construction work, disrupts their typical path.

“The biggest concern for us would really be our transportation back-and-forth to the airport,” Ms. Bravo said.

However, she said, despite the temporary inconveniences, the diamond configuration will improve traffic in the long-term. “They have to do this for the wellbeing of the area, for the upgrade of the highway, the convenience of our hotel shuttles and guest safety,” she said. “That’s a good thing.”

Mr. Toledo said he believes the diverging diamond interchange is an innovative approach to traffic jams.

“I’m not going to say that it’s going to solve the congestion problems, but it’s going to help reduce travel time through that area and improve safety,” he said. “I think it’s an opportunity to show that there’s a lot that we can improve to help traffic. This is one of them.”