Advertisement
The Newspaper for the Future of Miami
Connect with us:
Front Page » Government » Miami-Dade launching signal technology on South Dade Transitway 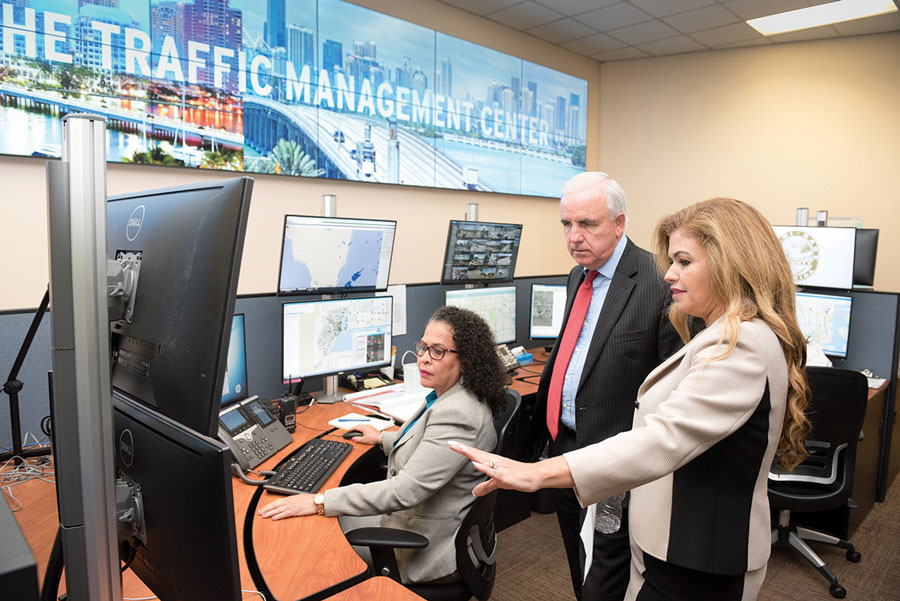 Miami-Dade is launching signal enhancement on the South Dade TransitWay this week that eventually will speed flows at 300 intersections along 10 corridors via an $11.1 million investment that transportation Director Alice Bravo said should help buses on dedicated express lanes arrive on time.

The new signal technology on the South Dade corridor covers all from Homestead to the Dadeland North Metrorail Station.

Econolite Control Products Inc. continues to install the programming, a technology that helps current transit signals detect buses on the corridor in advance and maintains a green light, allowing the bus to continue on its route without stopping.

The program is beginning over a month later than expected due to Hurricane Irma, Ms. Bravo said. “We didn’t have power; we had to repair a number of signals and so that impacted us a few weeks.”

Her department hopes to expand the technology into the remaining nine corridors within five years. Within 2018, officials look forward to the improvement in transit with the enhancement and revamping their bus fleets.

The project thus far took over a year.

County Mayor Carlos Giménez initiated the improvements first with the Traffic Management Center that includes a computer system connecting all signals in the county. The next step focused on the new signal technology to allow signals to better cater to the traffic flows in real time rather than rely on pre-programming.

Luis Espinoza, transit department special projects administrator, said, “Since June 2016, [the department] has been testing the 2070LX controllers to enable ‘smart signal’ capabilities along Northwest 36th Street, between 71st and 84th avenues, to see how traffic flow would improve along one of the county’s busiest corridors. Travel time data collected demonstrated a 10% reduction in travel time along the corridor.”

The department is connecting for the first time its adaptive signal technology with the Transit Signal Priority technology within these 10 corridors, including all of South-Dade TransitWay.

The adaptive signal technology relies on detectors to capture what occurs on roadways. Ms. Bravo said, “Those detectors help the signals do two things: see what’s happening at the intersection in real time, so if a certain direction is backing up more than others, that direction will receive more green time to flush out those lanes.

“The other thing is the signal communicates with other signals and has a good idea about what the travel speed is so that we can improve synchronization of the signals. So, when you’re driving through you can hit as many green lights as possible.”

The $11.1 million one-year contract includes the first 300 intersections along 10 corridors. Mr. Espinoza said, “The annual operation and maintenance cost of the new smart signals is covered under the current Traffic Signals and Signs operations budget, which allocated approximately $5,500 per traffic signal, including an average cost of $1,200 for preventative maintenance.”

County commission Chairman Esteban Bovo Jr. has supported the program since it was proposed and hopes to see its expansion. He expect shorter commutes on the bus system.

He focuses on the shortening of commutes as the main factor of the program’s success.

“I’m going to use a hypothetical: An hour-long ride turns into a 20-minute long ride. That’s the measuring stick,” Mr. Bovo said. “Does your ride improve? Does your length of time on our system shorten itself?”

He expects these improvements to encourage more use of the bus system.

The transportation department is looking to expand the Transit Signal Priority program within five years to the remaining nine corridors, including:

νNorthwest 163rd Street from US 1 to Northeast 10th Avenue.

νSouthwest 88th Street between US 1 and Krome Avenue.

Plans for the coming year include updating current fleets. Buses will include technology alerting drivers of nearby bicyclists and pedestrians in the vehicle’s blind spots. The buses will also contain environmentally friendly modifications.

“The new fleet, of both Compressed Natural Gas and 100% electric buses, will help us provide better service while spending less on maintenance,” Mr. Espinoza said. “This is our direction for a more reliable future for our transit system.”

Mr. Bovo urges the county to continue investing in technological advancements and other enhancements to public transportation.

“The hope is that within the next two to three years we start seeing actual capital projects being undertaken,” Mr. Bovo said. “The transformation of the way we move in Miami-Dade County will probably happen over a 15- to 20-year period if we stay consistent with the message that we need to give folks alternatives throughout Miami-Dade County.”