Advertisement
The Newspaper for the Future of Miami
Connect with us:
Front Page » Real Estate » Commission probes case of the disappearing public park 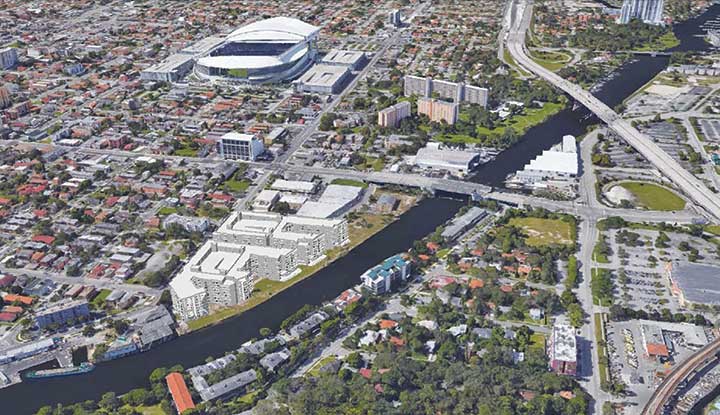 Some members of the Miami River Commission were disappointed recently to learn that a proposed major mixed-use residential project would not be providing a public park after all.
Mast Capital plans nearly 700 residential units in two buildings on a large vacant lot at a bend in the river, to be called Miami River Walk.
The 6.3-acre site at 1001 NW Seventh St. is on the south bank of the river, just east of the Northwest 12th Avenue Bridge, and Spring Garden is across the river on the north.
On Nov. 15 the developer’s team made a presentation to a committee of the river commission and promised as part of the project to provide a small public park on the site’s west end with a playground, interactive water feature and rest rooms.
Large booklets showing site plans given to the committee members identified the west corner as “Public Plaza Space,” with a playground, water feature, benches, lawn, pathways and restrooms, tied to 1,000 feet of improved riverwalk along the shore.
A fresh set of documents provided to the full river commission at its December meeting shows the western corner identified simply as “plaza” and “open space.” The restrooms and water feature are gone.
Attorney Carlos Lago, representing the developer, told committee members about the public park at the November meeting and said “This is a huge public benefit.”
At the commission’s December meeting, another attorney spoke for the developer and said Mast Capital would not and could not dedicate the western corner as a public park, citing liability concerns.
“We can’t commit to make it a public park,” said attorney Iris Escarra.
Brett Bibeau, river commission managing director, asked if a public park is included in a covenant offered by the developer.
Mr. Lago said, “No, it’s not.”
“I’m surprised,” Mr. Bibeau responded, saying he and the committee believed the open space on the western corner would be public park space.
“We cannot provide the entire space in the covenant,” Ms. Escarra said.
“That is inconsistent with the recommendation of the committee,” said Jim Murley, committee co-chair.
The committee had recommended approval of the project, with conditions, he noted.
Mr. Murley had said earlier in the December meeting that the fact the developer was providing public park space was “a big plus.”
What resulted was a split vote of the river commission.
A motion from Manny Prieguez to approve the project without the requirement of a dedicated public park passed 11 to 3.
Members David Maer, Patty Harris and Sallye Jude voted “no.”
The vacant property has a history. Miami city commissioners approved two 27-story residential towers for the site nearly 15 years ago.
A company called Royal Atlantic garnered a special use permit to build the sprawling project and marketed it as Rio Miami, but it was never built.
The site was used as a staging area during construction of the Marlins ballpark, which is about three blocks to the west in East Little Havana.
The Mast Capital plan calls for two eight-story mixed-use buildings with about 2,795 square feet of ground floor retail. The building on the west is planned at 348 dwellings and the building on the east 350 units.
A site plan by Corwil Architects shows the project coming in two phases, with the west building rising first.
Each building is to have an internal seven-story, 400-vehicle garage. The zoning code requires 1,125 parking spaces, and the developer is seeking a waiver of up to 30%, allowed for projects near public transit.
The project is to have more than 20,000 square feet of amenities, including two swimming pools and courtyards, a business center, game room, fitness center, and 1,000-square-foot theater.
The plan includes a 1,000-foot-long landscaped public riverwalk with lighting, seating and access from the on-road greenway on the west and east side yards.
On the west, the site abuts Miami-Dade County land that’s leased to New York fashion designer Naeem Khan, who plans a design studio and vocational school of fashion there.
The developer’s team has said no record could be found of any permitted boat slips tied to the site.
The committee had recommended approval to the river commission, with these conditions: return to the commission if boat slips are later added, make the riverwalk on the west a seamless connection with the proposed riverwalk on the county site, and make the public access on the east 8 feet of open walkway and 2 feet of landscaping, or more, depending on a subsequent meeting with co-chair Ernie Martin, who also sits on the full commission.
Mr. Lago reported to the commission that the developer and Mr. Martin did meet and Mast Capital is willing to redesign the eastern side of the project to make room for a 15-foot-wide public access leading to the riverwalk.
The developer also had community outreach with neighboring the Spring Garden Civic Association, and Mr. Lago said the group supports the project.
Carlos Salas, association president, told the commission the association has been negotiating an agreement with Mast Capital’s lawyers.
“This project is massive,” he said.
Mr. Salas said the association represents more than 200 households in the historic neighborhood, and one of their major concerns in noise. Some homeowners have complained of noise from waterfront restaurants in the area.
Amanda Hand, an attorney who lives in Spring Garden, offered to assist with an agreement and listed several items the developer agreed to, including a 15-foot-wide access on the east; removal of a planned sky lounge; designated enclosed non-commercial uses; the riverwalk must be completed before a temporary certificate of occupancy is granted or a temporary riverwalk constructed until all phases are completed; no outside alcohol sales; and if the developer later applies for a warrant to allow a restaurant, formal legal notice must be made to the civic association.

6 Responses to Commission probes case of the disappearing public park