Advertisement
The Newspaper for the Future of Miami
Connect with us:
Front Page » Profile » Ralph Lopez-Massas: Piloting a 12,500-person team at American Airlines hub 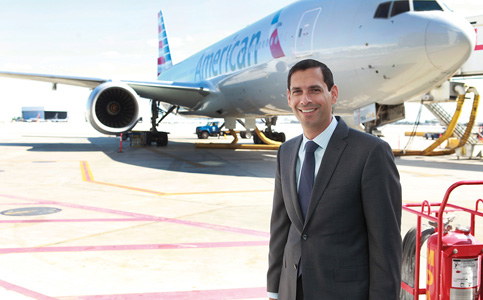 Ralph Lopez-Massas began his career with American Airlines by accident 22 years ago. While still in school, he took a summer job as a general reservations agent and now runs all operations for American Airlines out of Miami. “I never imagined I’d be here; a part time job evolved into a wonderful career,” he said.

American Airlines has been servicing Miami International Airport since 1991 and is the largest carrier, capturing 70% of total passengers this year, the Bureau of Transportation Statistics reported. Mr. Lopez-Massas oversees American’s team of 12,500 people at MIA. “It is humbling and not something I take lightly,” he said.

American’s brand was built alongside the Miami community, Mr. Lopez-Massas said, and they’ve become embedded in each other’s DNA over the years. “We’re very proud to be here and serve Miami,” he said. “There’s a deep history between American and Miami and we look forward to many, many more decades to come.”

Miami Today reporter Gabi Maspons interviewed Mr. Lopez-Massas at his office in MIA. The interview was recorded by Jahmoukie Dayle, and can be found Dec. 1 at http://bit.ly/2uNHy0Q.