Advertisement
The Newspaper for the Future of Miami
Connect with us:
Front Page » Transportation » Flexibility Miami-Dade transportation key, Gimenez says 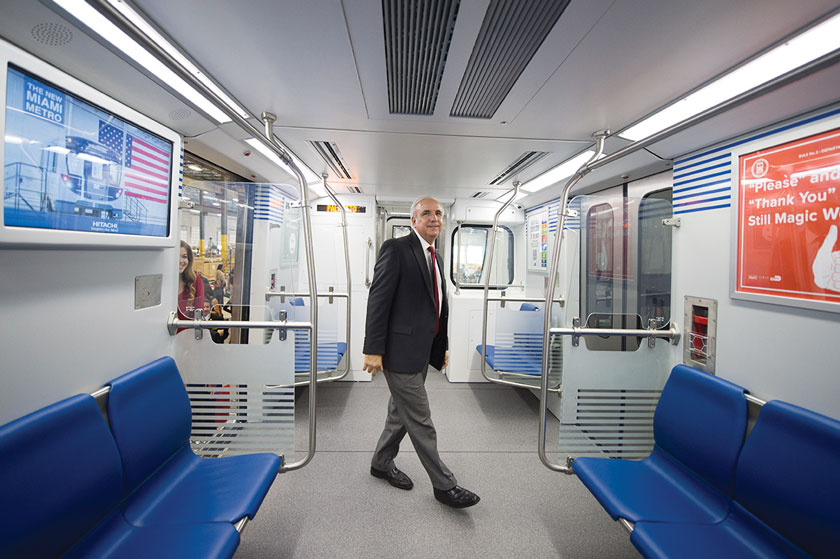 “We’re on the cusp of a revolution in transportation” with autonomous vehicles and other technologies, including trains with rubber wheels and movable tracks, he said. Whatever means of mass transit the county eventually chooses, “those stations need to be convertible.”

He said fully autonomous vehicles could be on the roads by 2021. “Florida has liberal laws on testing new technologies” that could allow the changes to occur quickly, he said.

Board members of the county’s Transportation Planning Organization (TPO) recently voted to prioritize the north and south corridors.

“We have the money to do the north and south corridors,” Mr. Giménez said. A necessary first step, regardless of the transit method chosen, is for the county to acquire the right-of-way along Northwest 27th Avenue (it already owns the South Dade Busway along the south corridor).

There has been an ongoing debate on whether trains, bus rapid transit or some other technology should be used on the corridors.

“I’m not against trains,” the mayor said, though he has said that train service is too expensive. “We want to get the corridors first, then determine what technology to use.”

Trains might be best for the northeast corridor, because the tracks are already there and All Aboard Florida might be interested in running commuter service in addition to its Brightline express trains, he said. “Half a million people live within a mile of that corridor.”

“I appreciate the complexity of the issue,” said authority board member Marta Viciedo, founding partner of Urban Impact Lab. “But it seems the Beach corridor is the quickest win. It would have the highest ridership,” because there is presently no mass transit between Miami and Miami Beach, and only bus service between Miami International Airport and the beach. “The ridership on the north and south corridors is not known.”

“We have new mayors in Miami and Miami Beach,” said authority Chair Ken Russell, who is a Miami commissioner. “Could there be a whole new world of cooperation between the cities? How can we get that to happen?”

Mr. Giménez said he expects to have a better relationship with Francis Suarez, Miami mayor, than he did with Tomás Regalado, former mayor of that city.

“We want Miami and Miami Beach to be connected; there are 60,000 jobs on Miami Beach,” Mr. Giménez said. “The three of us should get together to make Baylink a reality. Cities have to have skin in the game.”

“The TPO directed staff to make the north and south corridors the No. 1 priority,” Ms. Bravo said. “But that decision won’t block progress on anything else.”