Advertisement
The Newspaper for the Future of Miami
Connect with us:
Front Page » Government » US Homeland Security reports to shut Wynwood artery in Art Week 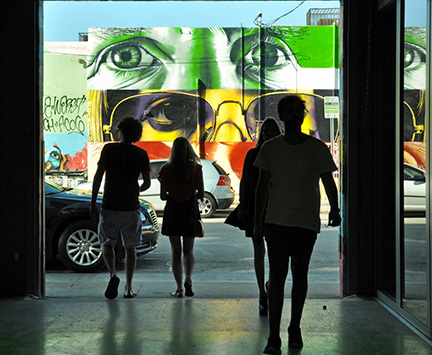 Citing reports from US Homeland Security and chatter culled from social media that a terrorist event may be brewing, the Miami Police Department will close most of Northwest Second Avenue in Wynwood – and possibly other streets – during the Friday, Saturday and Sunday of Art Basel (12/8 through 12/10).

Northwest Second Avenue is Wynwood’s main street, with clusters of restaurants, galleries and shops. Vehicular and pedestrian traffic is dense even without special events. The fear is that a drive-into-the-crowd attack – popular of late with terrorist factions – could kill and injure many.

“It’s way too dangerous” to leave Northwest Second Avenue open, said Albert Guerra, police commander for Wynwood and Edgewater. “We’re not going to risk that. It would be ignorant for us not to think we’re a prime target. Wynwood is the place to be, and this is an international event.”

Cmdr. Guerra said he had not drawn a definitive map of closures when he spoke to directors of the Wynwood Business Improvement District (BID) Nov. 15. Police and government authorities continue to meet and formulate plans, he said.

But he and BID directors said they would work with businesses to minimize the economic impacts.

Because of Halloween street closures, “my business was cut in half,” said Rocco Carulli, executive chef and owner of the R House Wynwood restaurant at 2727 NW Second Ave. “I wait all year for Halloween and Art Basel.” Similar hard times befell restaurants on Northwest Second Avenue that were affected by closures, he said.

“We don’t want to clobber you,” said Albert Garcia, BID vice chair and chief operating officer of Mega Shoes. “Is there some way we can work it out?” He offered to meet with Mr. Carulli to try to find solutions.

“This is not Halloween,” which fell on a weekday this year, Cmdr. Guerra said. “The closure map is still a rough draft. But do we want Second Avenue to be the way it is today, vibrant and alive, or do we want to have a memorial there, where 60 people were killed?”

“Safety is our paramount concern,” Mr. Garcia said. If an attack were to happen, “it would be way worse for Wynwood than Zika was.”