Advertisement
The Newspaper for the Future of Miami
Connect with us:
Front Page » Top Stories » Commissioners put Miami-Dade transit on hot seat 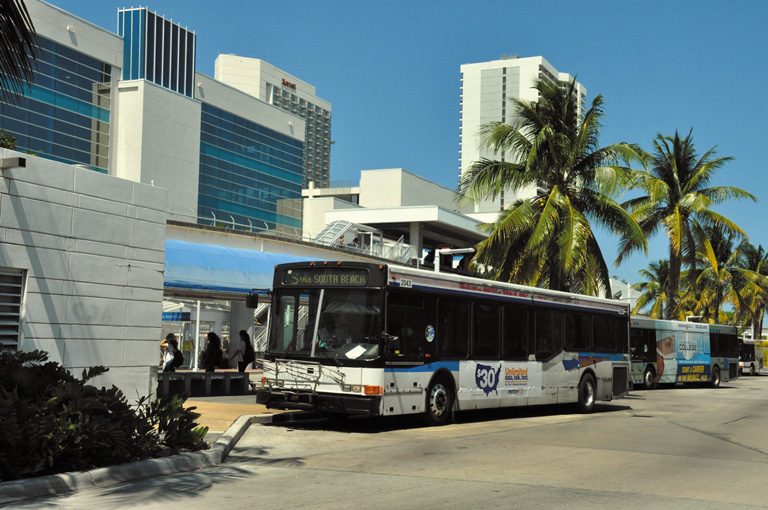 With declining transit revenues and not enough money to subsidize all services, Miami-Dade’s Department of Transportation and Public Works had to cut services to balance its budget earlier this year. While voting on a pre-approved bus service adjustment on Tuesday, county commissioners said they would be evaluating transit to push for more creative solutions.

Earlier this year, the commission fought with the administration about transit cuts during budget hearings. The budget department identified about $3 million in overhead savings within the transit department and suggested using People’s Transportation Plan money intended for transit expansion projects to cover operating costs. The commission compromised and approved the $4.4 million in savings for the bus route adjustments to balance the transit department’s budget.

“We are here for the public hearing process for what the board already adopted,” Budget Director Jennifer Moon said Tuesday. “A budget was adopted and you approved eliminating these routes because it is going to have the least impact. We’re just trying to impact the fewest number of people.”

“We keep telling people to get out of their cars, and then we chop off routes that don’t have sufficient riders,” said Commissioner Sally Heyman. Ms. Heyman said one route deleted leaves a portion of Miami Beach without a transit option south of 41st Street. “I can’t support this unless I have a commitment from Ms. Bravo that something will be looked at, because we can’t leave them totally isolated.”

“We will work with Miami Beach to find an option to provide a lifeline service there,” Ms. Bravo assured Ms. Heyman.

Commissioner Barbara Jordan said she was concerned that the county isn’t being sensitive to the needs of the riders, using a medical metaphor for the county’s transit system.

“The patient is dying on the table and we’re cutting service lines,” Ms. Jordan said. “We’re fighting against ourselves.”

Commissioner Daniella Levine Cava took the opportunity to voice concerns about a transit desert in District 8. “There are 11,000 people without access to transit. We have to go to where the people are,” she said. “We’ve only been looking at ways to cut the budget, not ways to invest. I’m not going to be supporting the plan at this time.”

By making the service adjustments, the transit department would save $4.4 million, Ms. Bravo said.

When Commissioner Dennis Moss asked what would happen if the route changes weren’t approved, Ms. Bravo said the department would have to reduce service in other ways to make up for the deficit.

“We’re already targeting the areas where we have the smallest amount of riders,” Ms. Bravo said. “We have limited resources and people are using other means of transportation. If not these routes, we will have to make frequency changes on heavier routes. If we stretch ourselves too thin, then we will be impacting the people who use our services the most.”

Ms. Moon chimed in, saying if the commission didn’t approve the cuts, the department would have to find $4.4 million in its budget by making deeper cuts to services.

“We will be forced to make reductions in headway across all routes and reduce frequency,” Ms. Moon said. “Federal law means we can do this without going before the board.”

“We are not proposing that this is beneficial to the county in any way; it is just what must be done to balance our budget,” she said.

Ms. Jordan said she will be putting in a formal request to have the Department of Transportation and Public Works audited. “I am not supporting this item and I will request a report to audit the details of transit with a list of specifics,” she said.

Commissioner Jean Monestime added to Ms. Jordan’s request. “My office will work with the county attorney’s office to do an independent study of mass transit in this county,” he said.

Before voting, commissioners pushed to have more creative transit solutions developed so they wouldn’t have to vote on making additional route cuts.

“We’re going to be in this quagmire until the department comes up with a creative way to make do with what it has,” Commissioner Esteban Bovo Jr. said. “We need to be bold with transportation, but until then we will need to adjust routes.”

Mr. Bovo said the county will suffer until transportation is revamped.

“Transportation is the key to affordable housing, workforce housing and economic stability. We aren’t going to lure Amazon to South Florida” with our current transit system, Mr. Bovo said. “We don’t have the ability to let an extra 50,000 people move in our community. We’re putting more cars on the roads and our buses are in the same traffic patterns as the cars.”

Mr. Moss agreed, saying, “I don’t understand where we will end up if we keep cutting services every year.”

“We are going to keep finding ourselves in this position, so we have to start thinking outside of the box,” Mr. Barreiro said. “Maybe we need to change it to a no-fare system until people begin utilizing and gaining more trust in us. We need to retool our current system. Our riders deserve it and our region deserves it.”

Commissioner Joe Martinez agreed that the county needs a new system, but said commissioners should be realistic about funding options when revenues are insufficient.

“When we have this bold discussion, let’s also have an honest one” Mr. Martinez said. “It means telling people that we need to raise their taxes because there are no revenues coming in. They may choose to raise them themselves or choose to get rid of what they had already taxed themselves.”