Advertisement
The Newspaper for the Future of Miami
Connect with us:
Front Page » Top Stories » Miami looks to creating trust to help fund The Underline

Miami looks to creating trust to help fund The Underline 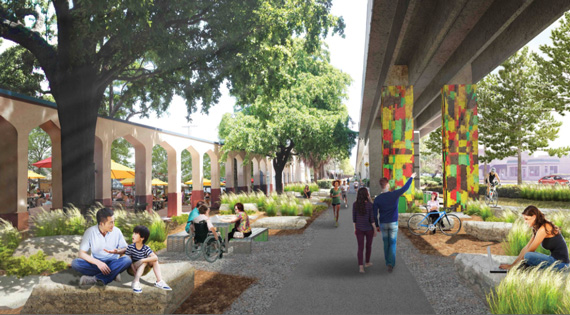 In the City of Miami, developers can earn additional floor space and height and other advantages by committing to spend money on public benefits, like constructing a new section of the baywalk or improving a nearby park.

In some cases the developer can pay cash into a public benefits fund in lieu of making the improvements.

The city employs the process to raise money for needed capital projects, from street improvements to affordable housing.

City commissioners are planning to create a public benefits trust to help fund The Underline, a 10-mile linear park and urban trail. The item, sponsored by Francis Suarez, is due for a preliminary vote at today’s (11/16) city commission meeting.

As currently written, the proposed ordinance says The Underline “presents an extraordinary opportunity to generate a significant amount of economic development in the region by increasing property values along the corridor and thus stimulating new and unique developments” that can reinforce The Underline’s vision as a new sector of the region.

The ambitious plan calls for transforming the land under the county’s elevated Metrorail into a linear park, urban trail and living art destination.

Miami-Dade County controls the land under the Metrorail, property that runs the length of the tracks. It is designated a Rapid Transit Corridor and also referred to as the M-Path.

Miami-Dade County’s Parks, Recreation and Open Spaces Department has partnered with Friends of The Underline to turn 10 miles of pathway beneath the Metrorail into something special. The initial plan includes upgrades to the M-Path between the Miami River north of Brickell and the Dadeland South station.

About half of the 10-mile route is in the City of Miami.

The new legislation notes that the city seeks to encourage reinvestment of construction and maintenance from development abutting The Underline.

It is intended that The Underline Public Benefits Trust Fund be established to collect cash contributions “to support reinvestment into the creation, operation, and maintenance, including capital and operating costs” of The Underline Master Plan vision within the city limits, the ordinance reads.

It is further intended that The Underline Public Benefit Trust Fund money may be expended as the city’s share of the cost of an eligible project undertaken or developed by other governmental entities or through a public-private partnership, according to the proposal.

This yearly allocation would be by the city commission, upon the city manager’s recommendation.

The proposal would also require an annual financial report on the trust fund prepared at the close of the fiscal year by the city manager, for review and approval by the city commission.

If approved, the trust fund would be just one of several funding methods to support the project.

The City of Miami was an early supporter of The Underline, contributing money toward the master plan in the fall of 2015.

In September 2016, city commissioners approved an understanding with the county to fund part of The Underline with park impact fees from new development.

The impact fees would come from new development within 1,000 feet of The Underline and wouldn’t exceed $50 million, according to the agreement.

The project’s vision is to enhance connectivity, mobility and biking safety for hundreds of thousands of Miami-Dade residents and visitors.

Meg Daly, founder of Friends of The Underline, said the project will make Miami a “connected, engaged community” and will add 60 acres of new open space – 10 acres in Brickell alone.

She said the project will be an economic driver, encourage more transit-oriented development and improve public safety.

More than 200 businesses and neighborhood associations support The Underline, and many area municipalities have provided funds for it. The largest private pledge was $600,000 from Swire Properties Inc., announced in 2016.

The project really got off the ground in October 2014 when county commissioners endorsed The Underline and provided a funding plan. James Corner Field Operations was chosen as master plan design team for the project.

Miami commissioners approved a $200,000 allocation to the county to help pay for the master plan, while the City of Coral Gables contributed $50,000 toward the master plan.