Advertisement
The Newspaper for the Future of Miami
Connect with us:
Front Page » Profile » Francis Suarez: Bringing a new administration to Miami Mayor’s Office 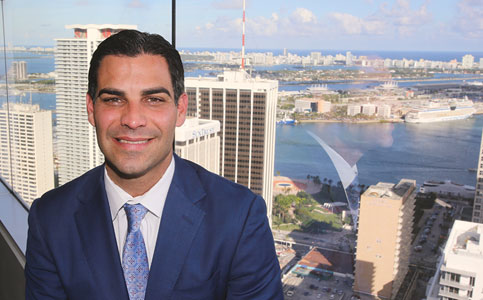 With over 85% of the vote, Francis Suarez cruised to the mayor’s office last week and was sworn in as City of Miami mayor this week. Even before taking office, Mr. Suarez told Miami Today he knows what he wants his legacy to be: ‘I hope that I leave with the reputation of being the most accessible mayor.’ He is known to give out his cell phone number to residents and actively responds to tweets to stay in touch with constituents.

Mr. Suarez is no stranger to the public eye. He has sat as a city commissioner for eight years and his father, Xavier Suarez, was Miami mayor while he was growing up. ‘I pray that one day … my son looks to me with the same level of admiration, respect and fondness that I have for my father.’

The homegrown mayor is potentially the first mayor born in the City of Miami in 121 years, he said. Mr. Suarez hopes to use his youth and energy ‘to be a visionary for the city’ and bridge the gap between the haves and have-nots by increasing incentives for affordable housing, updating transportation and making Miami a water-resilient city.

Miami Today reporter Gabi Maspons interviewed Mr. Suarez at the Carlton Fields law offices downtown where he is employed the Thursday afternoon before he was sworn in. The interview was video recorded by Jahmoukie Dayle, and can be found at http://bit.ly/2uNHy0Q.