Advertisement
The Newspaper for the Future of Miami
Connect with us:
Front Page » Government » Commissioner moves to save West Grove’s shotgun homes 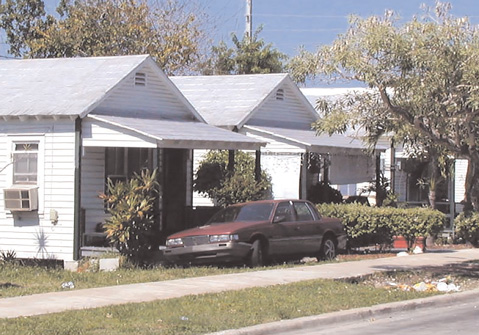 Shotgun homes – simple, long and narrow – are remnants of and reminders of South Florida’s earliest settlers.

These rare houses are worth saving and protecting, says Commissioner Ken Russell, who wants the City of Miami to adopt new historic preservation rules to bolster that quest. His district includes the West Grove, where about 20 so-called shotgun homes remain.

“The Grove has a lot of historic homes being lost,” he told colleagues Oct. 26. He mentioned the shotgun homes, calling them iconic.

A background memo on the proposal says that on Oct. 3 the city’s Historic and Environmental Preservation Board voted 9-0 to recommend approval of the amendment.

Mr. Russell’s ordinance says the preservation of the city’s historic resources is a significant goal in the city’s overall vision for its future.

The intent of the historic preservation chapter of the city code is to preserve and protect the heritage of the city through the identification, evaluation, rehabilitation, adaptive use, restoration, and public awareness of Miami’s historic, architectural, and archaeological resources.

In the proposed amendment, “Multiple Property Designation” means two or more historic resources related by a common theme, general geographical area, and period of time that has been designated by the preservation board.

The term “Multiple Property,” is described this way: Designation boundaries shall in general be drawn to include all Historic Resources related by a common theme and may include properties which individually have no relation to the theme. Properties within the boundary that have no relation to the theme will not require regulation under this Chapter of the City Code unless they are individually designated Historic Resources or included within a historic district or archaeological zone.

“The intention is not to go in and create large themes,” said Warren Adams, the city’s new preservation officer.

The proposal is one of several legislative steps contemplated by Mr. Russell and the commission in a broad effort to bring new life to the impoverished neighborhood.

Mr. Russell reminded fellow commissioners and the audience of other steps, including directing the city manager’s office to study the West Grove for property opportunities for construction of affordable housing, and studying the possibility of expanding the Omni Community Redevelopment Area, or CRA, to include the West Grove.

Financial assistance to help homeowners preserve their houses could come from several sources, Mr. Russell said, including a general obligation bond up for a vote of residents this week, final adoption of Art in Public Places rules, CRA expansion, and the Dade Heritage Trust.

Dolly MacIntyre of the Dade Heritage Trust board spoke in favor of the proposed amendment, saying the changes will make historic designation more efficient in the city.

She called it a “win-win” for the city and historic preservation.

Commissioner Wifredo “Willy” Gort supports the proposed amendment but said city officials should make sure to keep the public informed about historic designations, and to let potential buyers of designated homes know of the designation.

In a recent letter to the editor in Miami Today, Dr. Karelia Martinez Carbonell, president of the Historic Preservation Association of Coral Gables, praised Mr. Russell’s stance in proposing to protect and preserve the 20 or so remaining Bahamian-style homes in the Grove.

“These historic homes (also known as shotgun houses) are in danger of being lost to gentrification and development. Many have already been lost to neglect and destruction,” she wrote.

Shotgun houses are wooden frame structures one room wide and three rooms deep, with doors at the gable ends, wrote folklife curator Tina Bucuvalas. This house type originated in West Africa and is common throughout the Caribbean and the American South, she wrote.