Advertisement
The Newspaper for the Future of Miami
Connect with us:
Front Page » Top Stories » Rental apartment building proposed on shore of Miami River 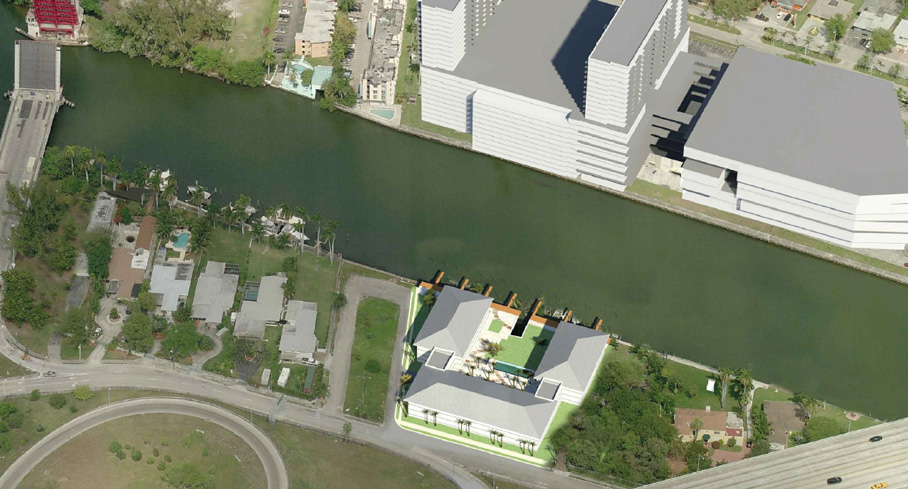 A developer is proposing to construct a rental building with 63 market-rate apartments on the south shore of the Miami River at 1515 NW South River Drive.

Antonio P. Pardo of 1515 Miami River LLC is requesting land use and zoning changes on the property from the City of Miami.

The Miami River Commission has recommended approval of the project, with several conditions.

The land use and zoning changes need a review by the city’s Planning, Zoning and Appeals Board, with final approvals from the city commission.

The site is near the Northwest 17th Avenue Bridge over the Miami River, and just north of the Dolphin Expressway (836) leading into and out of the city’s Health District.

The land is just east of a small linear green space known as Grove Park, framed by a U-shaped Northwest 16th Avenue.

The structure is designed at 42 feet in height, with a lower level of parking for 103 vehicles and three stories for dwellings. The site plan shows a pool deck, and a green space with a gazebo.

Ben Fernandez, an attorney representing 1515 Miami River LLC, told river commission members the new construction is planned for the middle river, an area that is less industrial in uses than further upriver to the west.

The project is planned across the river from a major mixed-use residential-retail-office development now under construction on the north side called River Landing Shops and Residences, Mr. Fernandez pointed out.

The developer is not required to build a public riverwalk, but the company has promised to do so and commit the promise to a covenant. The proposed 300-foot-long public riverwalk would be open to the public from 6 a.m. to 10 p.m.

The site now has 14 boat slips, which would be maintained after maintenance dredging required by the county’s Department of Environmental Resources Management.

“We think it’s a great project,” said Mr. Pardo, and will serve to compliment the new project on the river’s north side.

The apartment building will create a better transitional use with the Grove Park next door, said Mr. Fernandez.

While showing the river commission renderings of the proposed building, Mr. Fernandez characterized it as a modest, clean design.

River commission member Sallye Jude asked if any of the apartments would be affordable housing. Mr. Fernandez said no, the rental units will be market rate.

Area residents Janet Parker and Theo Long said they opposed the project, citing potential traffic problems and other concerns. Ms. Long said the state designated the area historic, and it includes historic single-family homes. Ms. Parker said she’s lived in the Grove Park neighborhood for 40 years, which is “inundated” by traffic generated by Marlins baseball games and the I-836 ramps.

In a letter to the city, Mr. Fernandez wrote: “The property is distinctively located at the intersection of the Orange Bowl District, East Little Havana, Grove Park, and the Health District (formerly known as Civic Center), areas, which continue to experience redevelopment resulting in significant population growth and business expansion.

“Due to its location, the property has unparalleled access to a variety of transportation options, including the Miami River to the north, the NW 17th Avenue Bridge to the east, and the SR 836 Expressway’s on-ramp to the south,” he wrote.

The property is 73,143 square feet or 1.748 acres. It currently houses three single-family homes with accessory structures, which are generally regarded to be in disrepair, he wrote.

“The applicant seeks to redevelop the property into a pedestrian-oriented residential community that is in conformance with the intent and goals of Miami 21. The proposed [zoning] designation will permit for a compatible residential community along the Miami River within walking distance of some of the city’s most important employment and entertainment areas in a manner that will remain respectful to the area’s residential character.

“The Health District is in great need of additional housing options to serve the thousands of individuals who work in the area,” Mr. Fernandez wrote.

The river commission voted 9-to-1, with Ms. Jude voting no, to recommend approval, with these conditions for the developer:

Provide the public riverwalk per the proffered voluntary covenant, plans, and letter and intent, and insert the needed eastern side yard connector to eliminate the dead-end.

Provide the working river disclosure covenant as required by the city’s Comprehensive Plan.