Advertisement
The Newspaper for the Future of Miami
Connect with us:
Front Page » Transportation » Miami International Airport flies high on first-class seats 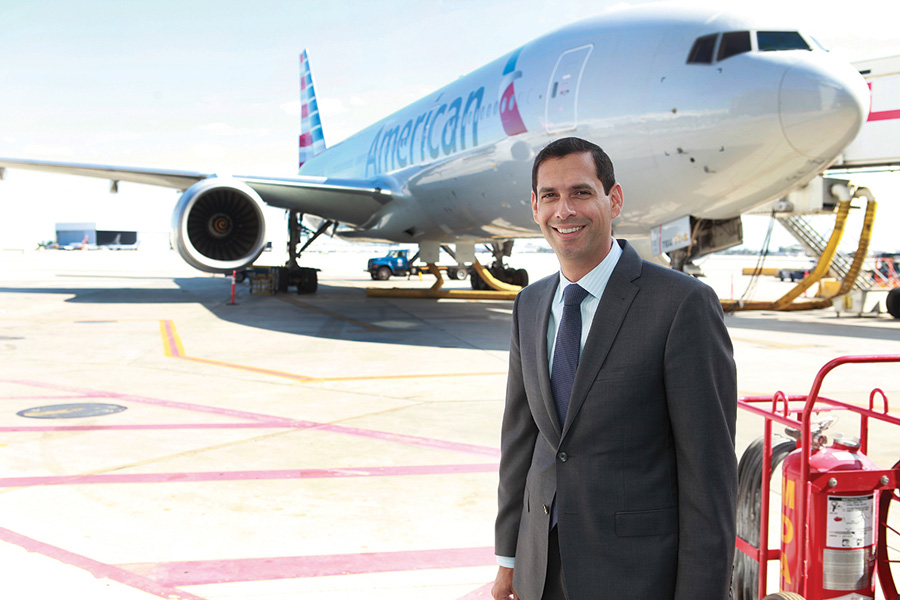 As the second busiest US airport for international passenger traffic, Miami International Airport has recruiting new international air carriers down to a science. Airport Director Emilio Gonzalez says one factor in luring in airlines is the number of first-class seats they can fill through a Miami connection.

“When we discuss starting a route to Miami, one of the things that is of great interest to passenger airlines is first class,” Mr. Gonzalez said. “They want to make money, and first class is where they make the most.”

When airlines develop new routes, seat configuration is not merely chosen based on available planes in a fleet but on the projected demand, said Ralph Lopez-Massas, VP of American Airlines’ Miami hub.

“We consider the demand first and foremost before we invest in putting in an asset – an aircraft – into a route,” Mr. Lopez-Massas said.

American Airlines accounts for about 68% of passenger traffic at MIA and meticulously connects aircrafts to routes.

“We have a very robust network planning department that looks at demand, connecting traffic and premium versus leisure demand,” Mr. Lopez-Massas said. “The purpose is to tie the density of the aircraft to that demand.”

When developing routes or making investments in new airports, the seat configuration is even more important, Mr. Lopez-Massas said.

To gauge local interest in international flights and advise potential Asian air carriers on the demand in the Miami market, MIA created an Asia Task Force.

“The task force is made up of business leaders with interests in places like Japan, China, Vietnam and the Philippines,” Mr. Gonzalez told Miami Today in August.

The airport meets with the task force to survey interest and frequency of travel. MIA compiles the information to pitch to airlines so they understand the market.

“When we had the task force do a poll, half of everybody polled said they would travel to Asia through business class,” Mr. Gonzalez said. “Most of the travelers to Asia would have their travel expenses covered by their company. Flying to Asia is a long trip, and you want all the comfort you can get,” he said. “If your company is paying for it, you take advantage.”

Of the routes at MIA, Mr. Gonzalez said long international routes fill up the first class seats the most. He said that most of the flights he has taken to Europe, Asia and the Middle East have had full first class sections.

“It’s very attractive for a new carrier to be able to fill those seats,” he said. “If you fill the first class cabin on an international flight, you’re doing okay.”

“Many don’t want to spend money on a first class ticket to Orlando, so you have to look at the market. Most airlines wouldn’t put 45 first class seats for a route like that,” he said.

The airport doesn’t directly benefit from airlines filling up their first-class cabins, as it collects revenues based on number of tickets bought, not the amount passengers pay.

“We get paid by seats, not by how much a passenger spends,” Mr. Gonzalez said. “If they can pack more passengers on the plane, that means more non-aviation revenues for us.”

Though the airport doesn’t directly benefit from filled first-class cabins, half of the 44.6 million passengers who went through MIA last year were international, so the airport is invested in understanding the demand to better attract new international airlines.

In 2017 MIA welcomed eight new international airlines, and Mr. Gonzalez told Miami Today it is committed to building up its brand as a global gateway.

“International routes are always important to us,” he said. “Airlines are our partners. We lobby them, have strategic plans, think of the routes we would like to have and which we need, and then we actively market our airport to international airlines.”