Advertisement
The Newspaper for the Future of Miami
Connect with us:
Front Page » Profile » Liliana Ayalde: Using her diplomatic skills for US Southern Command

Liliana Ayalde: Using her diplomatic skills for US Southern Command 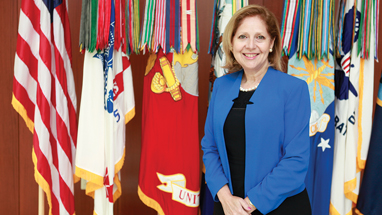 Ambassador Liliana Ayalde has been civilian deputy to the US Southern Command’s Admiral Kurt Tidd for less than a year, and she has already left a lasting impression. “She is the most approachable ambassador we’ve ever had,” colleague Raymond Sarracino told Miami Today.

Ambassador Ayalde says the secret to staying grounded is always remembering to care about people and staying true to yourself. Though she has credentials equivalent to a three-star general, she says all are welcome into her office, regardless of their level. “If someone comes to my office and needs to talk, I’ll talk,” she said.

The Southern Command, one of the nine unified combatant commands in the US Department of Defense, covers Central and South America and the Caribbean. Though many command centers are primarily military based, SouthCom has a strong humanitarian focus.

“Working at SouthCom requires a shift in mindset,” Ambassador Ayalde said. “Many go from combat post to combat post, and in some ways our region is more sophisticated because we deal with relationships.”

Managing these relationships across departments and agencies within the US and between countries is Ambassador Ayalde’s specialty. She is a two-time US ambassador, having been posted in Paraguay and Brazil.

Ambassador Ayalde says communication is key when managing relationships, and she works to ensure efforts are translatable across all agencies. She speaks English, Spanish, Portuguese, French “and military – that’s the most complex language I know,” she said.

Miami Today reporter Gabi Maspons interviewed her at US Southern Command in Doral. The interview, recorded by videographer JahmoukieDayle, can be found at http://bit.ly/2uNHy0Q.