Advertisement
The Newspaper for the Future of Miami
Connect with us:
Front Page » Real Estate » Plan for Fort Dallas Park, on the Miami River, evolves

Plan for Fort Dallas Park, on the Miami River, evolves 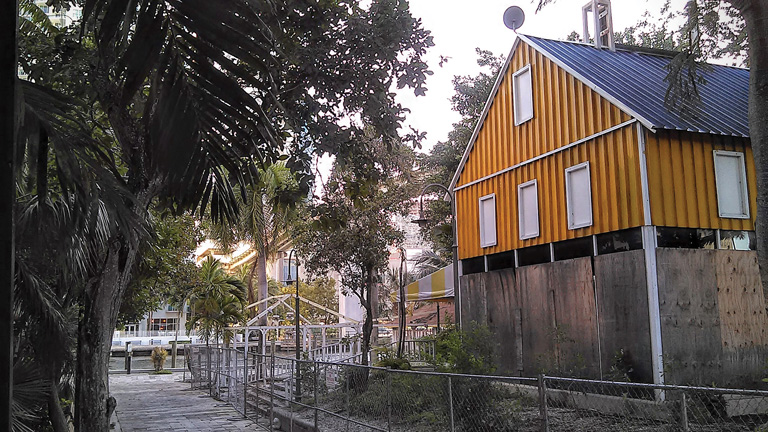 A proposal from a private company to redevelop city-owned Fort Dallas Park, on the Miami River downtown, has evolved.

The unsolicited proposal still pushes for a public-private partnership with the City of Miami, but instead of building a new 250-seat restaurant the developer is proposing a revitalized riverfront hosting several local small businesses.

The proposal, which includes restoration of a historic cottage, is listed as a discussion item on today’s (10/26) city commission agenda. It was deferred once last month and again Oct. 12.

Several structures occupy the site at 60-64 SE Fourth St., north of the river and sandwiched between a hotel on private land and the county’s Riverwalk Metromover station. They include a gutted and dilapidated former restaurant and The Flagler Worker’s House, also known as Palm Cottage, the last known building in Miami directly associated with railroad magnate and developer Henry M. Flagler.

For many years, seafood restaurant Bijan’s operated from the commercial building under a lease with the city. Litigation and allegations of unpaid rent ensued and the eatery eventually closed. The legal fights are over but the park’s fate remains in limbo.

For the most part, the waterfront site has been blocked off and forgotten, attracting trash and the homeless. The situation got so bad that a temporary security fence was installed around the site.

The Miami River Commission has for many years pushed the city to clean up and improve the park for public use.

A subcommittee of the river commission met Oct. 19 with members of Sanctus Spiritus Hospitality, including Mr. Esqueda and Ron Rick III. Santiago Leon was also listed as part of the ownership in a presentation to the committee.

The original unsolicited proposal came in a June 30 letter from Mr. Esqueda to Daniel Rotenberg, director of the city’s Department of Real Estate and Asset Management. That letter touted construction of a flagship restaurant with seating for at least 250, redevelopment of the existing historical building and capital improvements to the property.

The proposal called for the city to lease the land to the company for 10% of the restaurant’s gross sales.

The newest proposal is included in a letter dated Oct. 17 by Mr. Esqueda to Mr. Rotenberg. The new letter again proposes a public-private partnership and calls for, in part:

The company to demolish the unnecessary structures except the historical building known as Palm Cottage, in accordance with the City of Miami Historic Preservation Office standards. The company would build and renovate structures on the premises to contain local small businesses.

The city to grant the company a 30-year concession lease.

The company to share 10% of the gross revenue of the project’s operations with the city, as approved by both sides.

The company to maintain the property, including Palm Cottage and the adjoining dock.

The city to assist the company “with all municipal activities including… obtaining zoning approvals, entitlements, and permitting meetings.”

If the city commission approves moving forward, a vote of city residents may be required as well, because it’s city-owned waterfront property.

Jim Murley, co-chairman of the river commission’s Urban Infill and Greenways Subcommittee, opened the discussion last week, noting the history of the park. He said the river commission has fought for years to get the city to remove obstructions from the site and preserve the historic cottage.

“The public forgets it is public space … we need to get the public access restored,” he said.

“We welcome anyone who wants to improve Fort Dallas Park,” Mr. Murley said.

Mr. Rick said the present state of the property is a misuse of the land.

The company wants to redevelop and activate the property, including the cottage and the public riverwalk.

“Our vision is to create an asset for the city,” Mr. Rick said. “We also want to bring the community into the project,” he said, noting a plan to integrate the Dade Heritage Trust and area schools into activating the site.

He showed photos of an open-air design using repurposed shipping containers, terraces and other outdoor spaces.

The idea is to provide a synergy of businesses, he said.

“This is a hip, young, vibrant business center,” Mr. Rick said of the latest proposal.

The company has lined up potential business partners and has $3 million ready to be invested into the property, with an estimated time to completion of the project about two years after final approvals, he said.

Committee members were told the restored historic cottage would be used for cultural and community activities, management offices, restrooms, and salons or galleries for exhibitions.

The Dade Heritage Trust is listed as part of the company’s professional team.

Built around 1897, the house was one of at least 30 rental houses that Mr. Flagler constructed as homes for workers building his Royal Palm Hotel. The building was moved to Fort Dallas Park in 1980 and listed in the National Register of Historic Places in 1989.

In its presentation, the company says its team has experience in other local businesses including Wynwood Diner, PM Steakhouse and Cantina La 20.

Committee members were also told the company will maintain the side yard access and public riverwalk, will provide a slip for water taxis and will employ a traditional dock master.

He said minutes of the meeting will reflect that the subcommittee views this as a very interesting proposal, acknowledges the long approval process involving many agencies and stakeholders, and is willing to “act as conveners” to get everyone to the table.

The park came up in recent debate over redevelopment of nearby city-owned riverfront that’s home to a Hyatt Regency hotel and the James L. Knight Convention Center. Hyatt has proposed a major redevelopment but wants a new lease and control of the convention center.

City Commissioner Ken Russell has suggested a master plan for the entire riverfront, to include the hotel and convention site and Fort Dallas Park.

Most recently, Hurricane Irma destroyed the city dock hugging the shore of the park.