Advertisement
The Newspaper for the Future of Miami
Connect with us:
Front Page » Transportation » First 8 of 136 new Metrorail cars in testing 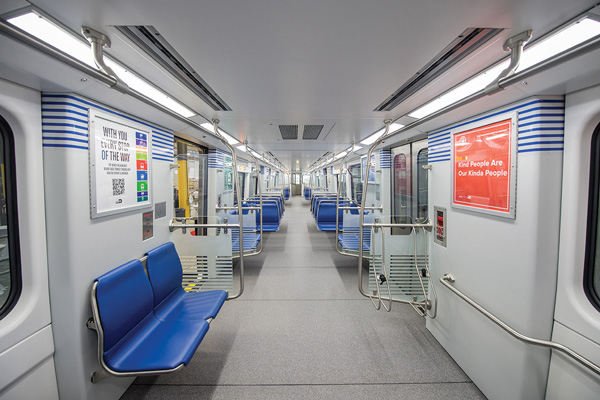 The first eight of 136 Metrorail cars to replace Miami-Dade’s metro fleet are in various stages of testing, the Department of Transportation and Public Works says. The first train is on schedule to begin service by the end of November.

“As the new Metrorail trains are placed into service, our customers will definitely see an improvement,” said Alice Bravo, director of transportation. “They will enjoy a smoother ride with fewer service disruptions.”

Sixteen cars are currently in production at the Hitachi facility in Medley, the transportation department said.

The 140,400-square-foot custom-designed Hitachi facility opened in March 2016, and was solely made for the manufacturing and subassembly of the county’s new trains.

The space is owned by Tokyo-based Hitachi Rail US and can test eight cars simultaneously.

Prior to arriving at the Hitachi facility, the train shells are made at the DRS Sustainment Systems Systems in West Plains, MO, which primarily handles military defense contracts.

Once the shell arrives in Miami, workers assemble the doors, electrical systems, wheels and axels, the rooftop HVAC and the under-frame equipment that takes the cars down the tracks.

The tests in the Medley facility “are all about electronic and water-testing,” Ms. Bravo told Miami Today in February. “Then they will be taken to the Lehman Center in late March to run on tracks.”

In the Medley facility, 400 spray nozzles shoot water at the trains for a prolonged period in large sloped pits to test the water pressure they can sustain.

Once the trains are proved capable of handling Miami’s climate, work begins on the interior of the cars.

The new cars are roughly the size of the existing fleet but have improved technology.

The transportation department says the cars will feel and sound much different to riders. They have much quieter disc brakes than the existing fleet, computerized control systems for smoother acceleration and reduced use of electricity, making them more reliable.

“We remain on schedule to place the first train in service by the end of November 2017,” the department said.

In the meantime, the transportation department is finding ways to improve the ride quality of the existing fleet while riders wait for the upgrade, Ms. Bravo said:

“As new trains are prepared for their debut, we are continuously working on ways to improve the maintenance of our current vehicles to help minimize breakdowns and enhance their reliability.”