Advertisement
The Newspaper for the Future of Miami
Connect with us:
Front Page » Real Estate » Related Group plans for Olympia Theater building put off again 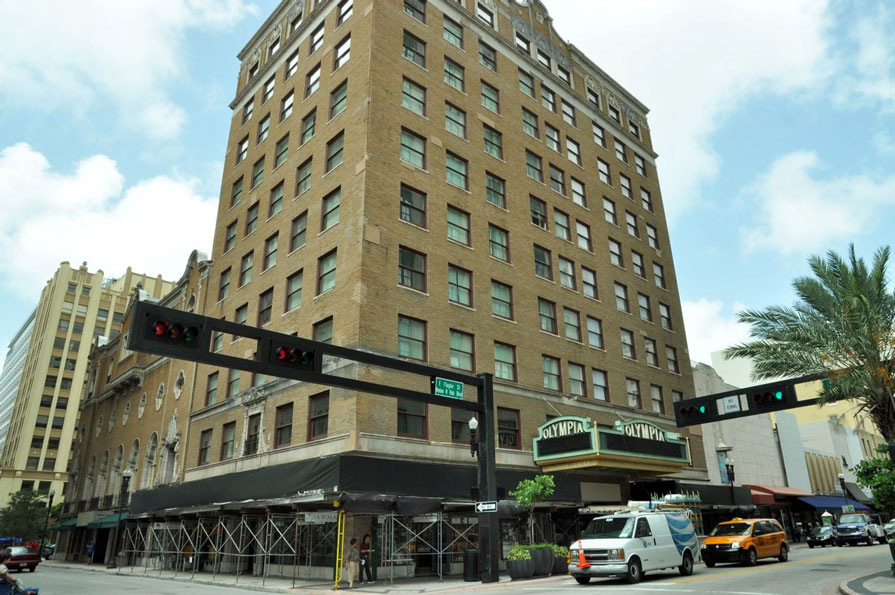 A Related Group subsidiary’s proposal to redevelop the Olympia Theater building in downtown Miami was put off for a second time last week, as the organization that runs the theater voiced objections to the plan to alter the historic building.

The proposal was supposed to get an airing last month before city commissioners, but Vice Chairman Ken Russell asked that the item be deferred, saying the proposal had spurred questions and concerns and deserved more research before a vote on whether to proceed.

The item was again on the commission’s agenda Oct. 12 for discussion, and again Mr. Russell moved for a deferral, until Oct. 26.

Even in the face of the latest deferral some spoke about the proposal during the public comment period, both pro and con.

The City of Miami owns the aging Olympia Theater at the Gusman Center for the Performing Arts at 174 E Flagler St., which is currently managed by Olympia Center Inc., a Florida not-for-profit.

The city’s Department of Real Estate and Asset Management has received an unsolicited proposal from RUDG (Related Urban Development Group) LLC, to form a public-private partnership to redevelop the site’s 80 residential units and make capital improvements to the theater.

Robert T. Geitner, Olympia Center Inc.’s executive director, spoke first Oct. 12 to read a statement from his board of directors into the record.

Olympia Center Inc. is a 501 c3 non-profit formed specifically to manage, activate, program and preserve the historic Olympia Theater and office building for the community and for future generations of Miamians, he said.

The Olympia was constructed in 1926 and donated to the city as a cultural arts facility by the Maurice Gusman family in 1975.

Mr. Geitner said his board reviewed the proposal by Related Urban Development Group and doesn’t believe it is in the best interests of the city and its taxpayers – the owners of this national registered listed historic community asset. The proposal doesn’t present best efforts at preservation of the Olympia and office building for future generations, he said.

“The density of development as proposed for the site, and the demolition involved to achieve it, may not be in the best interest of the Flagler District of downtown Miami and its residents, businesses and property owners.

“The proposed and intense almost exclusively residential use is not in the best interests of the Olympia Theater and its operation as a cultural center in downtown Miami,” Mr. Geitner read.

“Olympia Center Inc. would like to see a vision-driven, open and public process used to define any future redevelopment of the historic theater and office building to ensure that the community that owns this important regional, cultural landmark asset has an opportunity to participate in determining its future,” he said.

Mr. Geitner added that he looks forward to coming back “and mustering support for a vision-driven, not project-driven, project for this site.”

“I know the item’s been deferred, but I want to put just a few things on the record, as a point of clarification, as it relates to the proposal for the Olympia Theater. I think there’s a few misconceptions out there as far as the fact that somehow we want to demolish the theater, which is not correct,” he said.

“The idea is that we want to find a use that we can redevelop the residential portion of the site into a mixed-income community … to have a percentage of the building be affordable, the rest of the building be workforce, along the lines of the [affordable] housing ordinance,” Mr. Milo said.

He said the premise is designed to address two major needs at the property.

“You have a major capital improvement need, because the building is in – and the façade specifically – is in very bad shape, and it continues to deteriorate. And then you have an operating challenge on the operation side,” he said.

The idea is to form a partnership with the city and be able to renovate the facility and subsequently help subsidize the facility, Mr. Milo said.

And the city has done its part, he said, noting that the city has appropriated $3 million over the last three budget cycles to improve the property.

“And with all due respect to Mr. Geitner and his board, you know, over five years ago they were given the opportunity and task to try to recapitalize this asset and get it out of the red and here we are today now over five years later and basically having the same discussion.

“We’re for the deferral. We’ll continue to have discussions and look forward to the opportunity to come back,” he told commissioners.

The theater was named to the National Register of Historic Places in 1984.

A background memo from city staff says RUDG proposes to demolish and replicate the building, in accordance with the City of Miami Historic Preservation Office standards, into a mixed-income affordable and workforce housing development with 200 to 300 units, and to renovate the theater.

The proposal came in a three-page letter May 9 from Mr. Milo. RUDG is a Related entity formed in 2009 to develop and acquire affordable and workforce housing.

“The city will lease the land to the owner entity for a capitalized lease payment amount approved by both parties,” Mr. Milo wrote.

It is intended that the owner entity have one member, RUDG LLC will be the managing member and will have 100% ownership, the letter says.

“RUDG will secure the construction loans and will provide the necessary guaranties to finance the project and have sole control of all major decisions and day to day operations,” it says.

With city approval, RUDG would select a 501 c3 non-profit to manage the Olympia Theater, according to the proposal.

The Olympia Theater opened in 1926 as a silent movie palace and the city’s first air-conditioned building. For many years after it was donated to the city, the Department of Off-Street Parking managed the property.