Advertisement
The Newspaper for the Future of Miami
Connect with us:
Front Page » Profile » Armando Bucelo Jr.: Actively chairs Miami Dade College Board of Trustees 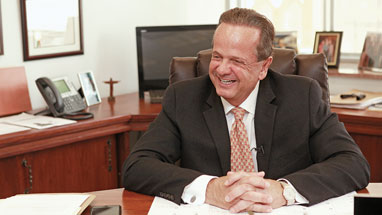 Armando Bucelo says he is ‘never bored,’ and is always working to make Miami an even more vibrant community.

Mr. Bucelo was appointed to the Board of Trustees of Miami Dade College in 1999 and sits as chairman of the board. ‘I dedicate an incredible amount of time to Miami Dade because they help people,’ he said. ‘I owe everything to Miami Dade.’

Nationally, Mr. Bucelo has been recognized as one of the most highly appointed Cuban Americans in the White House, serving as chairman of the Securities Investor Protection Corp. under President George W. Bush and the first Hispanic and Floridian selected to the Board of Directors of the Federal Home Loan Mortgage Corp.

‘It’s been a fun ride, but I will always be proudest of my family,’ Mr. Bucelo said. He says he loves going to work every morning and spending time with his family in the office. Mr. Bucelo’s wife, Beatrice, works just down the hall, and all three of his children are lawyers. ‘We are now really Bucelo Group,’ he said.