Advertisement
The Newspaper for the Future of Miami
Connect with us:
Front Page » Profile » Norman Braman: Prepares for opening of Institute of Contemporary Art

Norman Braman: Prepares for opening of Institute of Contemporary Art 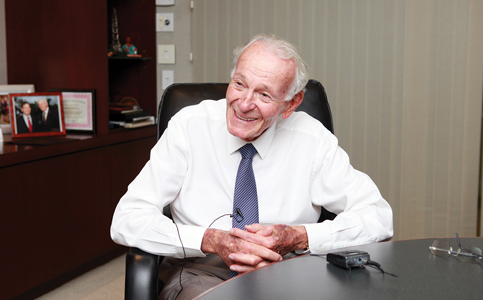 In Norman Braman’s conference room you will find those things closest to his heart: a revolutionary war flag from 1777 and a framed, handwritten note from his granddaughter, reminding him to always fight for what he believes in.

Mr. Braman says he has no patience for those who complain about local issues but do not interfere, fearing backlash: ‘I fight for what I believe in – I’m not afraid,’ he said.

His love for his country is deep, but not blind; Mr. Braman says he supports the Miami community by working to make it better.

A former National Football League team owner, Mr. Braman says he understands and supports the players who are protesting by kneeling during the national anthem. ‘They love this country as much as anybody else and they want to make it better,’ he says.

A first generation American citizen, Mr. Braman says preserving our freedoms is important. To that end, Mr. Braman and his family have supported Holocaust research all over the world. His projects are not exclusively beneficial to Jewish communities, he says, but can teach future leaders of any background about the history ‘of what hate can do.’

Mr. Braman is not shy about putting his money where his mouth is, and is known to generously support leaders he believes are responsive to the community, and he says he will continue to do so.

Though he moved to Miami in 1969 to retire, his time off was short lived, and he hasn’t slowed down since.

Braman Motors is one of Florida’s largest car dealerships, but Mr. Braman has always prioritized his family and philanthropic and political projects. ‘Appreciating my marvelous family made for the happiest seven years of my life’ during that retirement, Mr. Braman told Miami Today in 1989.

In Miami, the foundation opened the Braman Family Breast Cancer Institute at the University of Miami in 2002. In 2014, the Braman family launched through FIU a mammogram mobile named after Mr. Braman’s late sister-in-law Linda Fenner. The mobile offers uninsured women in Miami the latest breast cancer screening technologies and has screened over 1,000 women, detecting about a dozen early-stage breast cancer cases.

In addition to the causes Mr. Braman supports through his foundation, he fully funded the construction of what he calls his ‘legacy project’: The Institute of Contemporary Art, opening later this year in the Miami Design District. The museum is to have free entry and is fully funded by private donations from community members.

Miami Today reporter Gabi Maspons interviewed Mr. Braman at the Braman Management headquarters. The interview was recorded by videographer Jahmoukie Dayle, and can be found at http://bit.ly/2uNHy0Q.