Advertisement
The Newspaper for the Future of Miami
Connect with us:
Front Page » Top Stories » FEMA won’t cover cost of replanting tree canopy after Irma 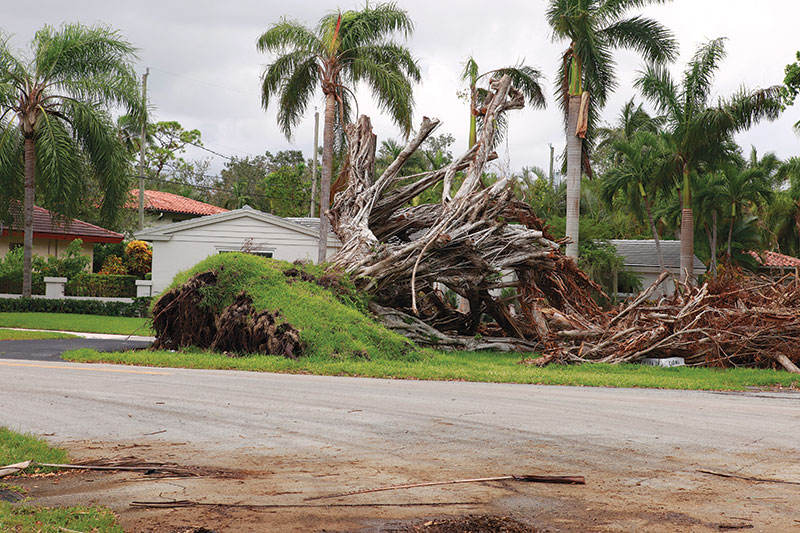 Even before the storm hit, the county’s tree canopy was struggling, said Gaby Lopez, Neat Streets manager in the county’s parks department.

“Our community has about a 20% tree canopy – meaning, the percentage of area covered by shade trees,” Ms. Lopez said. “That’s much lower than the 30% to 40% national targets for healthy metropolitan cities.”

After Hurricane Irma, The Parks, Recreation and Open Spaces Department estimates it has lost 30% of the already limited tree canopy in its parks and rights-of-way across the county, said Maria Nardi, parks director.

“We’re finding an estimate for how much it will cost within the parks department to replace our tree canopy, but there isn’t a county-wide estimate,” Ms. Nardi said.

Though some fallen trees still have a shot at survival after being quickly replanted, some replanted trees are likely to die within the next year, Ms. Lopez said.

“The number in parks is a good measurement of the percentage of the canopy lost,” Ms. Lopez said. “And that’s a conservative estimate – it may be more than 30%.”

Neat Streets Miami, a county board chaired by Commissioner Dennis Moss, is working to increase Miami-Dade’s tree canopy through its Million Trees Miami program, a county initiative started in 2011 to plant 1 million trees by 2020.

Neat Streets has two sources of funding, both of which are to increase this year, and will help to cover the cost of additional trees planting in the wake of Hurricane Irma, Ms. Lopez said.

Some 35% of the Tree Trust Fund, funded by money collected through tree permitting throughout the county, goes into a tree matching grant Neat Streets runs to encourage municipalities to plant more trees.

The Tree Trust Fund collected more money this year and the tree matching grant is to receive an additional $50,000, 25% more than last year’s allocation.

When asked how the county is to fund any additional trees, Ms. Lopez said it is always looking for more funding opportunities.

“There are a lot of eyes on Miami, and people know we lost trees and are willing to help,” Ms. Lopez said.

American Forests, one of the nation’s oldest conservation organizations, is helping to connect the county to funding sources.

Neat Streets has worked with Bank of America, Bacardi, TD Bank and others to host employee engagement events to plant trees in parks around the county.

“We reached out to Arbor Day Foundation, who launches community tree restoration programs after national disasters, and they’ve set up a fundraising campaign to help us restore our canopy in the next two to five years,” Ms. Lopez said.

Miami-Dade County’s Landscape Manual suggests guides for how, where and which trees to plant.

The Landscape Ordinance is an enforceable code that states the minimum standards when planting trees, but it applies mostly to public spaces.

The code requires the parks department to adhere to the “right tree in the right place” guidelines, Ms. Nardi said.

When thinking about which trees to plant after a storm, there isn’t always an easy answer, as plants are complex, integrated systems, just like the Miami-Dade environment, said Joanna Lombard, a registered architect and professor at the University of Miami who studies public health effects of built environments.

Miami’s surface, climate and plant population is as complex as a storm system, and we need to reframe how we think about the environment in Miami and who is responsible to maintain it, Ms. Lombard said.

“Many have a limited understanding of storm systems; they’re complicated and have different elements,” Ms. Lombard said. “If a vegetable soup can is thrown at you, you may get hit by a carrot or just have some broth in your hair.”

To account for the variable surface system, the parks department follows historic guides when planting trees, which “identify the plant species that have shown to best grow in the various regions/soil types of Miami Dade,” Ms. Nardi said.

Rather than thinking about plants as isolated, we have to think about how they contribute to the larger ecosystem and tree canopy throughout the county, Ms. Lombard said.

“We need a better understanding of how connected we are; we’re not islands, and our decisions affect everyone around us,” Ms. Lombard said.

Our ecosystem is integrated and “we’re not just responsible for what we own,” Ms. Lombard said. Recovering from the storm and increasing the tree canopy in the county, she said, should be a community effort.

Miami sits on a porous limestone bed so every street is connected.

“If you put cardboard on a sponge, it won’t stop water from being absorbed,” Ms. Lombard said. “And if you put ink on one side of the sponge, it will still be seen on the other.”

Though the county is inclined to compartmentalize departments to address problems, Ms. Lombard recommends integrating efforts to rebuild after the storm, reframing how we think about greenery and communicating with each other.

Ms. Lopez extended an invitation to all who are willing to plant trees throughout the county:

“We work with anyone who wants to work with us – No project is too small.”