Advertisement
The Newspaper for the Future of Miami
Connect with us:
Front Page » Top Stories » County asked to restrict Port of Miami developments 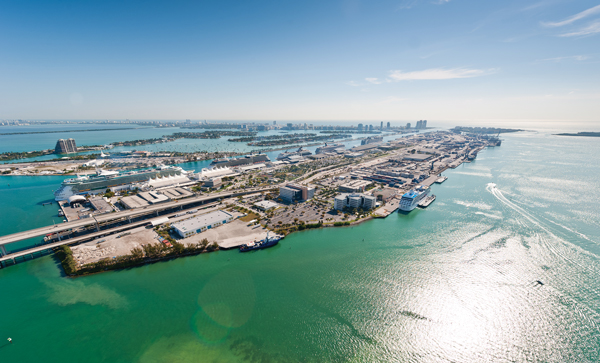 Miami-Dade Commissioner Rebeca Sosa, who for years has sought to limit development at the Port of Miami to port-related projects, this week asked fellow commissions to make that aim county policy.

The resolution would direct the administration to update the port’s 2035 master plan and develop “the Port of Miami 2040 Master Plan” to conform to her proposed policy that all future port development “shall be for seaport purposes.”

For years, outside developers have had designs on the port for projects ranging from hotels to sports arenas and office towers. Most of those aims targeted 11 vacant acres at the port’s southwest corner. Some also sought adjacent sites near that land.

All of those unsolicited deals have been backed by some commissioners. Ms. Sosa’s resolution seeks to stave off such developments.

The resolution notes that the City of Miami and the state gave the county the port land to create the present seaport on Dodge Island. The earlier port for Miami had been on city land on Biscayne Boulevard near where the American Airlines Arena sits today.

But the land gifts for the current port came with strings attached, the resolution notes, that the site could only be used for a seaport. That could be problematic for development: the City of Miami several years ago threatened to try to reclaim the port land if it were used for non-port purposes.

Ms. Sosa’s resolution says “the county seeks to further develop the Port of Miami without any uncertainty as to whether such further development… avoids any potential violation of such deed restrictions and to ensure that other current seaport users such as cruise lines, cargo terminal operators and cargo shipping lines… are amenable to such development.”

Both the state and city, she said, have said they don’t object to more development for port purposes.

In May 2016, Mayor Carlos Giménez, facing a commission order to expedite development of the port’s southwest corner, told commissioners that after a survey of stakeholders he’d told Port Director Juan Kuryla to pinpoint uses that most benefit the port.

The mayor also said then that the port was to award a contract to update its master plan. Commissioners have relied on the old plan as a green light to seek profitable outside projects on the mostly bare land.

The mayor’s memo revealed one hot-button use: “Most of the stakeholders (nearly every cruise line and several of the other non-cruise stakeholders) expressed an interest in locating their offices on the port.”

In February 2016, commissioners upset with the mayor’s response to a 2015 directive to seek proposals for developing the 11 acres unanimously deferred even accepting his report on ways he was looking for the site’s best use.

The mayor said then, however, that circumstances had changed after the commission’s order.

One change: the port was awash in cash, whereas earlier it had faced difficulties.

The mayor’s report said cruise lines were seeking pre- and post-cruise activities on the land, including pre-boarding areas; ferry facilities; hotels for passengers, and a site for crew needs.

Earlier unsolicited proposals for the site had included a Major League Soccer stadium for a team fronted by David Beckham and a multi-use project.

Mr. Kuryla concurrently said the port had different needs than those pinpointed in its 2010-2011 master plan, with a demand that year for more cruise ship berths. More recently, the port has signed contracts with major cruise lines for massive new terminals to handle the latest era of large cruise vessels.

There was also a move to smaller, more upscale cruise ships, and a demand for refrigerated warehouses, Mr. Kuryla said then. “We propose to update our master plan to reflect those new realities.”

Commissioner Sosa had brought legislation in 2015 that she said would protect the port and ensure stakeholders would keep using it, though colleagues largely disagreed.

“I’m trying to make sure we put in writing that we are not risking the port at any time and want something that protects us legally,” she said then in reference to a resolution, which she ultimately withdrew, that would have prohibited presentation to the commission of any legislation dealing with commercial development at the port.

The commission two weeks earlier had discussed Miami Yacht Harbor, which had proposed a trade center, hotels, office space and a marina on the land.

The majority of commissioners disagreed with Ms. Sosa’s other 2015 resolution that would have directed the mayor’s office to consult with all port stakeholders to access its land use and infrastructure needs over the next 20 to 30 years as well as amend the port master plan as it related to commercial development.

Port officials said then that they anticipated starting an updated master plan, an undertaking that takes approximately two years to complete that they perform every five to eight years.

2 Responses to County asked to restrict Port of Miami developments