Advertisement
The Newspaper for the Future of Miami
Connect with us:
Front Page » Government » Miami-Dade’s Charter Review digs into procurement methods 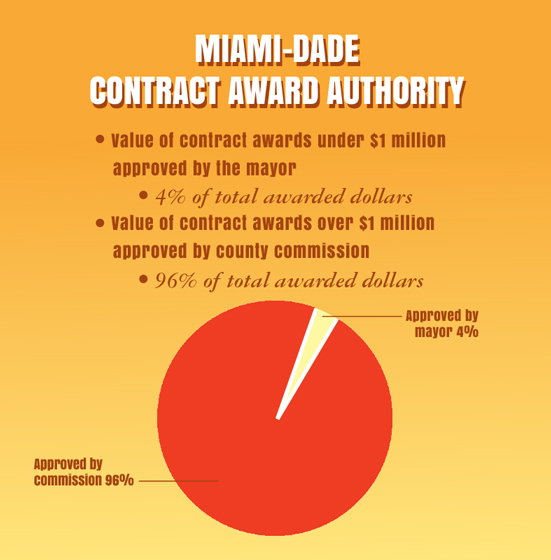 Miami-Dade’s Charter Review Task Force on Monday voted to amend the commission auditor department title and requirements for its director, heard presentations on the procurement process and postponed voting on any changes in that process until the next meeting.

Task force member Eric Zichella proposed an amendment to the charter that would re-name the Office of Commission Auditor as Office of Management and Research, along with eliminating the requirement that the department director be a CPA. Alfredo J. Gonzalez suggested the department be called the Office of Budget and Research, saying its personnel have less to do with management than budget matters. Mr. Zichella accepted the change to his amendment, and the panel adopted it 6-2.

The 14-member panel is to spend the better part of a year examining the charter, the county’s equivalent of a constitution, to see what changes it will recommend to county commissioners. The commission, it turn, will decide which recommendations are permitted to go to voters, who make the final decisions on charter changes. The charter itself requires the review at least every five years.

The panel next considered the county’s procurement process, beginning with an overview of its legal framework by Assistant County Attorney Oren Rosenthal. Observing that although procurement is largely governed by state law (and therefore outside the purview of charter review), Mr. Rosenthal suggested that in some areas the panel could recommend changes. While the county commission must keep the power to accept or reject contracts, that power can be delegated to the mayor. The panel, Mr. Rosenthal said, could restrain or augment that power of delegation by charter.

Maurice Ferre offered an amendment, which the panel decided to postpone considering until the next meeting so all members will have an opportunity to digest it.

His amendment, geared to prevent corruption and increase efficiency, would create an independent procurement department with a director appointed by the mayor and subject to county commission approval. The independent department would make recommendations to award contracts over $1 million (currently 96% of all county contracts) subject to approval or rejection by a majority vote. Mr. Ferre’s amendment would only allow the county commission to take other actions or fire the director with a supermajority, two-thirds vote.

“We’re talking about $5 billion worth of contracts annually,” he said. “This is big. My experience is that corruption always comes in where the money is. The issue of money for contracts is very complicated.”

Mr. Ferre thanked Mr. Rosenthal and his team for following his request to “look at best practices and come up with alternative approaches.”

As for other agenda items, the panel decided against changing the county’s budget process as well as organization and function of the Finance Department by not acting on these two items. Mr. Zichella nonetheless stated for the record his belief that the county commission should be responsible for preparing the budget instead of (or in addition to) the mayor.

The panel’s fifth meeting was dramatic for what didn’t happen as well. Within the first 10 minutes and as the clock ticked toward 6:30 p.m., Chair Robert Cuevas was worried he’d have to cancel it under the rules. The eighth member arrived around 6:45 p.m., achieving the required quorum.