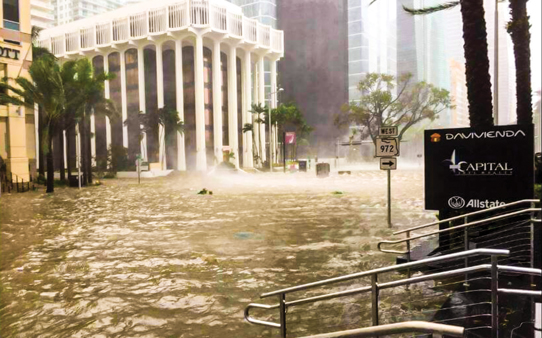 While Miami-Dade County officials are hard at work recovering from Hurricane Irma, the county still doesn’t know who is to foot the bill for the preparations and pick-up, and it might not know before year’s end.

“We’re still figuring it out,” said Barbara Galvez, operating coordinator for the Office of Management and Budget.

For now, the money for storm preparations and recovery “comes from each department’s existing budget,” Ms. Galvez said.

“If they don’t have the funding at the end of the fiscal year, then we have to figure out how to provide it,” she said.

“Early projections from our Department of Solid Waste Management indicate that we will collect approximately 400,000 tons of debris from Hurricane Irma, which is significantly higher than what we collect in bulky waste pickup and trash and recycling centers in an entire year,” Mr. Giménez wrote.

Mr. Giménez also requested an extension beyond 30 days “in order to address the need for federal assistance in the recovery process.”

“Hopefully they will move us along by December, but the number of storms this year may delay the reimbursement,” Ms. Padron said.

When addressing FEMA funding at the last budget hearing, Mr. Giménez said, “If you think we’re bureaucratic, you haven’t seen anything. We need documentation for every single expense and we’re putting a team together to make sure we get every penny we’re entitled to.”

Before FEMA representatives come to Miami-Dade, each department is filling out paperwork with hourly reports, equipment used, regular and overtime hours, where they are working and more, said Ed Marquez, deputy mayor for finance.

“It’s too early for us to tell you right now how much we’re seeking for reimbursement,” Mr. Marquez said. “It will be a couple of months before we know the estimate from FEMA.”

To mitigate the costs FEMA won’t cover, the mayor’s office says it projects a $2 million bump in county sales tax revenues from residents preparing for and recovering from the storm.

Mr. Giménez asked the county commission to consider creating a recovery reserve “to cover costs of lost revenue, replace our tree canopy and work toward further hardening our infrastructure.”

“I will include the necessary budget adjustments in the change memo before the second budget hearing” today (9/28), Mr. Giménez said.

“The additional money would have to come from reserves or reduced services,” Ms. Moon said.

Even if FEMA reimburses 100% of emergency measures, “there are certain things that it can’t cover,” said Mr. Marquez.

FEMA cannot pay for the 171 tons of ice the county distributed – though Mr. Marquez said the county will argue there is a medical need – or for trees replanted.

“It’s a process,” Mr. Giménez said. “It’s not going to be instantaneous.”