Advertisement
The Newspaper for the Future of Miami
Connect with us:
Front Page » Arts & Culture » Intermission in plans to redevelop Olympia Theater 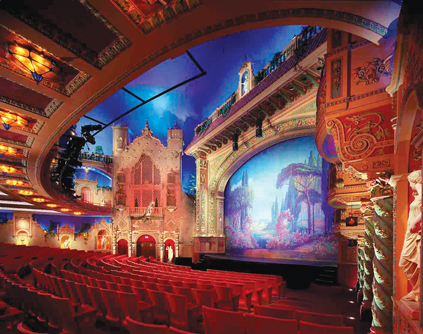 A City of Miami commissioner has called for an intermission in reaction to a developer’s plan to redevelop the iconic and historic Olympia Theater in downtown Miami.

An affiliate of mega-developer the Related Group is proposing to rehab the theater and redevelop the residential units above.

Ken Russell, vice chairman of the city commission, was quick to call for a deferral when commissioners met Sept. 19.

Mr. Russell said the proposal has spurred questions and concerns and the matter deserves more research before the commission votes on whether to proceed with such a deal.

The aging Olympia Theater at the Gusman Center for the Performing Arts hasn’t had a major facelift in more than 15 years.

The city owns the property at 174 E Flagler St., which is currently managed by Olympia Center Inc., a Florida not-for-profit.

The city’s Department of Real Estate and Asset Management has received an unsolicited proposal from RUDG (Related Urban Development Group) LLC, to form a public-private partnership to redevelop the site’s 80 residential units and make capital improvements to the theater.

Related proposes to demolish and replicate the building, in accordance with the City of Miami Historic Preservation Office standards, into a mixed-income affordable and workforce housing development with 200 to 300 units, and to renovate the theater.

The theater was named to the National Register of Historic Places in 1984.

The proposal came in a three-page letter May 9 from Alberto Milo Jr., senior vice president and principal of Related Urban Development Group, a Related entity formed in 2009 to develop and acquire affordable and workforce housing.

The letter offers some details and notes that the city has already allocated $3 million for capital improvements to the site.

The theater opened in 1926 as a silent movie palace and the city’s first air-conditioned building. Maurice Gusman bought the theater and adjacent Olympia office building in 1975 and donated them to the city.

For many years, the city’s Department of Off-Street Parking managed the property.