Advertisement
The Newspaper for the Future of Miami
Connect with us:
Front Page » Profile » Maria Nardi: Directs cleanup, recovery of county parks and beaches 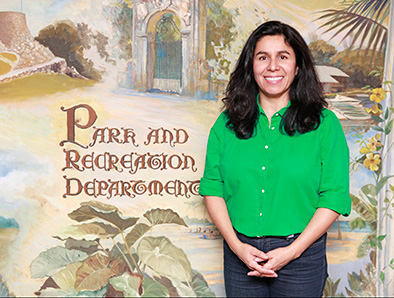 After directing Miami-Dade County’s Parks, Recreation and Open Spaces Department for only two months, Maria Nardi is leading the cleanup and recovery effort of 270 parks, 20 miles of roads, 15 miles of beaches, golf courses and marinas.

While many members of Ms. Nardi’s team have been without power themselves, they’ve worked longer hours to help community members have access to streets and parks after Hurricane Irma. “After being cooped up in homes without AC… people need to get out after a storm, and they go to parks,” she said.

Though some parks are already accessible to the public, it will be a few months before all parks are open again. Ms. Nardi says responding to Hurricane Irma has been challenging for the county because it was not concentrated in one area, but the storm’s effects spread across the whole county. “In previous storms, we’ve had quicker recovery in some areas,” she said.

Before taking over for previous directors Jack Kardys and George Navarrete, who briefly succeeded the retiring Mr. Kardys before his own retirement, Ms. Nardi was the assistant director of planning and design excellence, where she co-authored the Master Plan, a 50-year, $3.4 billion project to transform the way the community interacts with public spaces.

“Our question wasn’t ‘How do we develop a parks master plan?’ It was, ‘What is the role of parks in creating a livable, economically vibrant community?,” Ms. Nardi said.

While developing the Master Plan, Ms. Nardi looked at successful model cities that are economically vibrant and found that “people want to live in places that are beautiful, where they can walk to a park and enjoy natural resources with their families,” she said.

Parks are not just recreational spaces, but the foundation of vibrant cities: “They revitalize and completely transform communities.”

Her previous workspace, just one floor below her new office, is an interactive planning studio; there is a materials lab, and the shared space is lined with maps and future project ideas pinned to the walls. The planning and excellence department develops $50 million worth of projects each year, varying in scale.

Miami’s walkability baseline right now is pretty low at 58%, and Ms. Nardi is excited about connecting each member of the Miami-Dade community to parks and creating a more livable county. The parks system starts “the minute you step outside your door,” and connects you to the rest of the county, she said.

Though Ms. Nardi doesn’t have a favorite park, she says most community members do. “People are still connected to [their favorite parks]… they grow up near a particular park and it stays with them throughout their lives,” she said. Ms. Nardi hopes to keep people “connected to parks for life” by making them more accessible.

Miami Today reporter Gabi Maspons interviewed Maria Nardi on Friday at her office downtown. The interview was recorded by videographer Jahmoukie Dayle, and can be found at http://bit.ly/2uNHy0Q.