Advertisement
The Newspaper for the Future of Miami
Connect with us:
Front Page » Real Estate » Waterford at Blue Lagoon to build Burger King Corp. hub 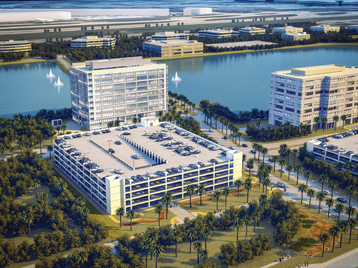 Waterford at Blue Lagoon, which is owned by a joint venture between TH Real Estate, a real estate investment management affiliate of TIAA, and Allianz Real Estate of America, is planning to construct and complete a five-story building known as the 5707 building by October 2018.

The new building, which is set to be the new location for the Burger King Corp., “will contain 150,000 net rentable square feet,” Brad Simpkins, senior director of Southeast Investments at TH Real Estate, said. “It is a single-tenant building and is 100% leased.”

In addition to its new location, the Waterford, which is developed in conjunction with The Hogan Group, also opened its 800 Waterford building last month.

At opening, he said, the building was 25% leased.

In regards to how the Waterford plans to meet the growing demand for additional office space in the Miami Airport submarket, Mr. Simpkins told Miami Today, “800 Waterford represents an evolution of the office product in the Miami Airport submarket, we have incorporated a larger parking structure to accommodate the higher densities we are seeing, and the building incorporates both a conference center and an open collaborative area and coffee bar.”

However, despite unveiling its newest building and rolling out its next location, the Waterford has yet to develop approximately 38.13 vacant acres on its campus just south of Miami International Airport.

“It is a very fluid situation, Mr. Simpkins told Miami Today. “The market conditions will dictate our overall schedule of development.”

Once a concrete schedule of development is set, the developable land could house more than 1.5 million square feet of offices according to the park’s website.

Until then, Christoph Donner, CEO Allianz Real Estate of America, said, “We are listening to our tenants and support them as the needs for their workplace changes.”

“This approach,” he said, “has ensured that Waterford is 96% occupied, and we are seeing a lot of interest from tenants both from within and outside the park.”