Advertisement
The Newspaper for the Future of Miami
Connect with us:
Front Page » Top Stories » Park(ing) Day Miami to put parks in parking spaces 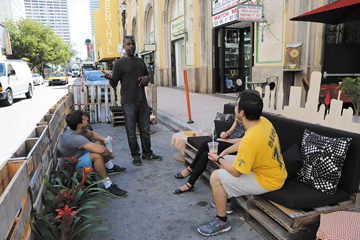 Following a successful event last year, the Urban Impact Lab is once again organizing Park(ing) Day Miami, in which contestants vie to create the most imaginative mini-park in a parking space of their choice on Friday, Sept. 15, between 10 a.m. and 8 p.m.

“The mission of Park(ing) Day is to call attention to the need for more urban open space, to generate critical debate around how public space is created and allocated, and to improve the quality of urban human habitat,” said a release about the 2016 event.

Last year, there were 10 registered competitors and six non-competing mini-parks throughout Wynwood, Downtown Miami, and Brickell, the release said.

Irvans Augustin and Marta Visiedo, partners in the Urban Impact Lab, expect the same number of participants this year, they said.

The prospect of better utilization of public space more than compensates for the temporary loss of parking spaces, said Ms. Visiedo, who is a director of Miami’s Downtown Development Authority.

“It’s just a few hours in a day, and it’s about greater access to open, public space, and making sure there’s a balance of how we allocate space,” she said.

“It changes how people engage with their city,” Mr. Augustin said. “We’re not going to get rid of traffic or shut down roads. It’s a drop in the bucket compared to all the activity that happened during Biscayne Green,” when, as a demonstration project, the downtown authority repurposed an area on Biscayne Boulevard between Southeast Second and Northeast First streets in January.

Park(ing) Day Miami participants will choose parking spaces from a pre-selected Miami Parking Authority list, and then will create their mini-park. There are some restrictions, which are listed on the event’s website, and a small fee to enter the contest.

“Park(ing) Day is a annual open-source global event where citizens, artists and activists collaborate to temporarily transform metered parking spaces into ‘Park(ing)’ spaces: temporary public places,” according to the website parkingday.org. “The project began in 2005 when Rebar, a San Francisco art and design studio, converted a single metered parking space into a temporary public park in downtown San Francisco.

“Since 2005, Park(ing) Day has evolved into a global movement, with organizations and individuals (operating independently of Rebar but following an established set of guidelines) creating new forms of temporary public space in urban contexts around the world.”