Advertisement
The Newspaper for the Future of Miami
Connect with us:
Front Page » Real Estate » Omni neighborhood changing in a big way with Melo

Omni neighborhood changing in a big way with Melo 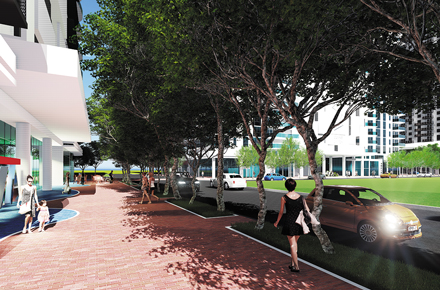 The north end of the Metromover’s elevated track ends at the School Board Station in the Omni neighborhood, at 50 NE 15th St. Much of the surrounding land has remained vacant, dormant or underdeveloped for decades.
That’s all changing in a big way as The Melo Group works to transform the area, encouraging other development in the growing Arts and Entertainment District and bringing much-needed workforce housing to the urban core.
The latest venture from the Melo family of developers is Miami Plaza, a mixed-use residential building planned for an assemblage of parcels just north of the Metromover station.
To be allowed the density it hopes to achieve, Miami Plaza LLC (a Melo affiliate) is requesting a rezoning of 1502 NE Miami Place, 1512 NE Miami Place,1523 NE Miami Court and 47 NE 15th St.
Miami Plaza is proposed as a 36-story building with 437 apartments, about 7,000 square feet of retail and a parking pedestal for up to 523 vehicles.
The Planning, Zoning and Appeals Board on July 31 recommended the rezoning. The city commission will make the final decision.
Iris Escarra, an attorney representing Miami Plaza LLC, mentioned changes in the evolving neighborhood in a letter to the city as part of the rezoning application.
The changing conditions and recent redevelopment near the Miami Plaza site warrant the proposed rezoning, she wrote, citing the Canvas Condos, a 37-story 513-unit residential mixed-use development.
Ms. Escarra said Miami Plaza is to rise in an emerging area of the city.
“Residents are trending less towards urban sprawl and seeking out residences with pedestrian-friendly accommodations. Moreover, Downtown Miami, Edgewater, and other emerging areas within the Omni (Community Redevelopment Area) point to the need of maximum use of every parcel available. Residents want to live, work and play in neighborhoods without the need for their own personal transportation,” she wrote.
The Miami Plaza site is within the Miami-Dade County Transit MetroBus, Metromover and Metrorail systems, with stops nearby, she said.
“The rapid growth of the surrounding area supports and demands the zoning change to a higher transect zone designation promoting growth along major thoroughfares. The character of the surrounding areas has evolved to consist of more liberal commercial uses and higher scale multi-family residential uses which has served as a catalyst in the revitalization of the area and stimulated economic growth and jobs in the Omni (area) and surrounding neighborhoods,” Ms. Escarra wrote.
As they have for their nearby residential projects, the developers are willing to file a covenant that declares that at least 14% of the dwellings at Miami Plaza will be designated workforce housing. Workforce housing is generally defined as attractive and affordable for middle-income service workers, such as police officers, teachers and nurses, near their jobs.
City officials have praised the Melo family for its investment in and commitment to the urban core, in particular for delivering on promises to provide workforce housing.
Hugging the Metromover station on the south is Melo’s Square Station project, now under construction.
The twin 34-story towers built to a connected pedestal providing 946 parking spaces are rising on what was vacant land between Northeast 14th and 15th streets, abutting the Metromover station.
Square Station is to have about 355 residences in each tower, along with about 15,000 square feet of commercial and retail space.
In July 2016, city commissioners approved rezoning the property for Square Station and praised the developer for promising to bring much-needed workforce housing to the area.
In a covenant with the city, the company promises that 96 of the 710 apartments – about 14% – will be reserved for workforce housing.
Earlier this year, commissioners also approved the rezoning of 1336, 1348, and 1366 NE First Ave., 50 and 58 NE 14th St. and 1335 NE Miami Court, allowing increased floor area for Art Plaza.
That Melo project is designed as twin 36-story towers offering 667 residences, 15,000 square feet of commercial space and parking for 886 cars.
The evolving neighborhood includes The Melo Group’s Melody Tower, a 36-story mixed-use residential building at 245 NE 14th St., across the street from the Adrienne Arsht Center for the Performing Arts.
Along with providing 497 rental apartments, Melody has about 8,500 square feet of ground floor commercial space and a landscaped plaza with public art.