Advertisement
The Newspaper for the Future of Miami
Connect with us:
Front Page » Transportation » Brickell tunnel under the Miami River gets a unanimous OK

Brickell tunnel under the Miami River gets a unanimous OK 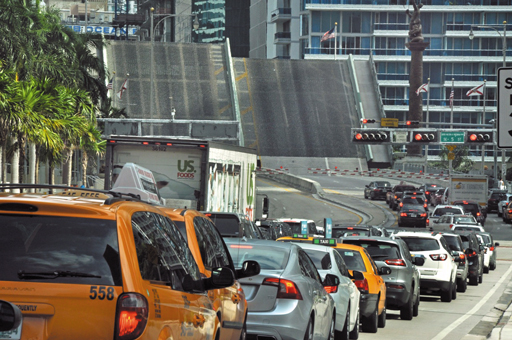 The push to bore a tunnel underneath the Miami River got a boost when the Transportation Planning Organization (TPO)’s Transportation and Mobility Committee voted unanimously last week to add the tunnel to a 2040 long-range transportation plan.

The committee also voted to urge the Florida Department of Transportation to fund and order a study that is required before the county can apply for state or federal money. The matter is to go before the TPO’s full board Sept. 14.

“I don’t have to convince you of the critical need for access between Brickell and downtown, and how difficult it is currently when the [Brickell] bridge is up, how paralyzed those two centers of commerce become,” Francis Suarez, Miami commissioner and committee chair, told fellow committee members. “This is the best idea I could come up with to move people in an efficient and dedicated fashion. The longer we wait, the more expensive it becomes.”

The City of Miami’s downtown area population has increased 37% over the past three years, he said. Sales taxes from businesses downtown and in Brickell contribute $4.5 billion annually – almost 5% – to the state’s budget, he said. “It behooves the state, and all of us, to try to find a way to relieve this bottleneck, because a lot of economic activity centers around our downtown.”

The downtown authority has waged battle with the US Coast Guard, Florida Department of Transportation and Miami River Commission over what it says are improper openings of the Brickell Avenue bridge that bring traffic to a standstill downtown and in surrounding areas. So far, it’s a standoff, with the authority calling for help from Sen. Bill Nelson and the river commission getting support from Rep. Ileana Ros-Lehtinen.

In January, Mr. Suarez, who is a mayoral aspirant, received the authority’s blessing for the tunnel.

“It doesn’t take a rocket scientist to understand that one of our biggest challenges is the inability to get around Miami when that bridge is up,” Mr. Suarez said then. The bridge opens more than 26,000 times per year, costing millions in lost productivity due to snarled traffic, he added.

“Downtown deserves this, and it would cost about one-quarter of what the PortMiami tunnel cost,” Mr. Suarez said.