Advertisement
The Newspaper for the Future of Miami
Connect with us:
Front Page » Profile » Maria Alonso: Ex-volunteer is new CEO of United Way of Miami Dade 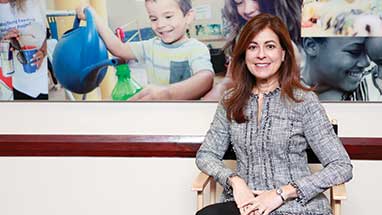 Maria Alonso has never followed a traditional trajectory and rejects the idea that people need to fit into a mold to have successful and fulfilling careers.

The new president and CEO of United Way Miami Dade says she has always challenged herself to explore her interests, even if they don’t align with what makes the most sense professionally.

After graduating with honors in industrial engineering from the University of Miami, Ms. Alonso worked for two years in engineering before deciding she was more interested in developing relationships with people.

In her most recent role with Bank of America – where she has worked since 1995 – Ms. Alonso was senior vice president and Miami market manager, deeply involved in the community.

Throughout her professional career, Ms. Alonso has maintained a strong commitment to volunteerism. She has been active on several boards, and has worked with United Way Miami Dade for over 20 years.

She says her mother taught her to have empathy for those who weren’t as lucky, and feels an obligation to give back to the community.

When it comes to work, Ms. Alonso brings the same passion, intensity and commitment she has fostered in her personal life, she says.

United Way has a history of evolving with the community, and Ms. Alonso would like to build on its momentum and move the mission forward by listening to peers and empowering everyone in the United Way community to create a culture where all are driven to do their best.