Advertisement
The Newspaper for the Future of Miami
Connect with us:
Front Page » Government » Site pinpointed for new civil courthouse in Miami 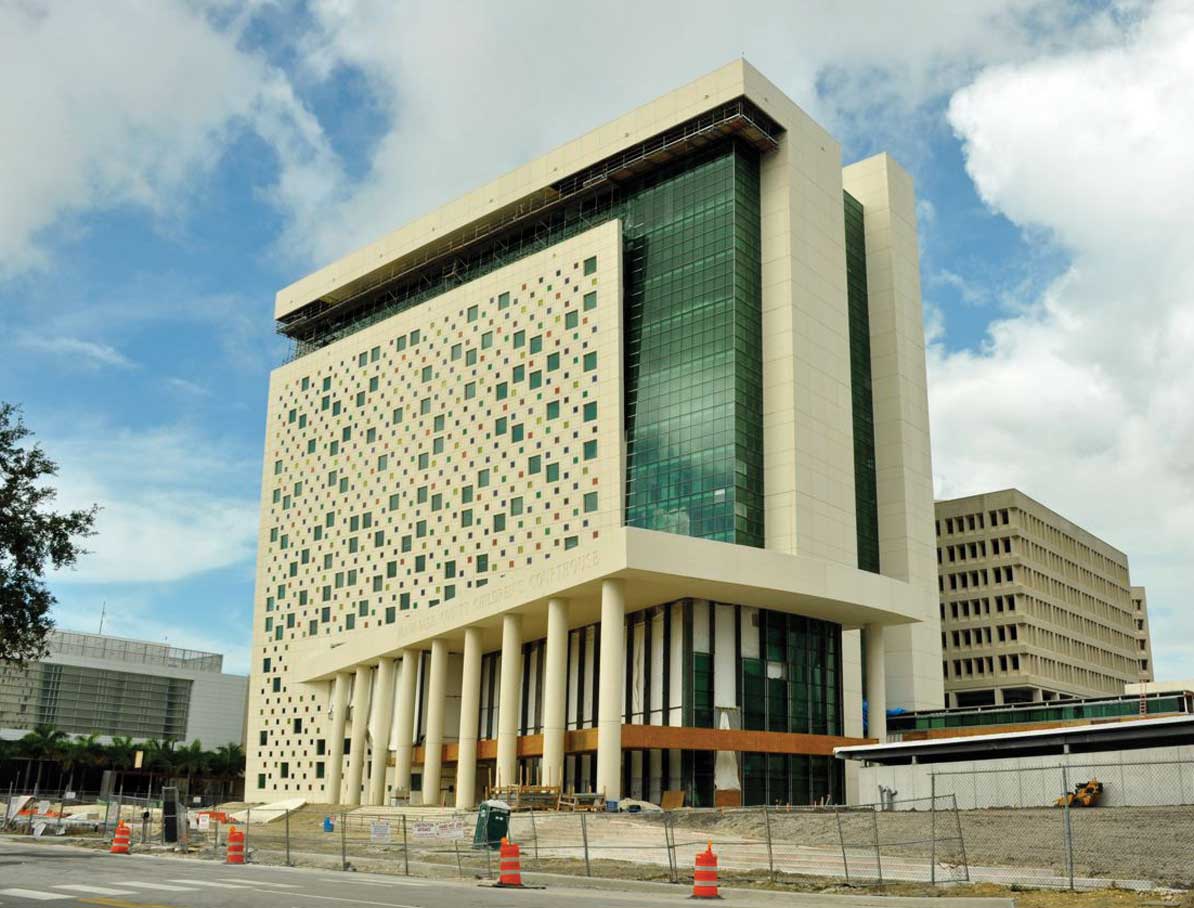 The preferred site for a new civil courthouse is the surface lot at the recently completed Miami-Dade County Children’s Courthouse at 155 NW Third St., according to a report Mayor Carlos Giménez sent to county commissioners last week.
Two parties have provided in-depth analyses for helping construct a new Miami-Dade County Courthouse but staff needs more time to analyze the best way forward, the report says – including finding funding for the project.
The county’s Internal Services Department is to come to the county commission in October to recommend a solicitation method for a civil courthouse partnership and the related county real estate assets to be part of that deal, the report says.
The historic Miami-Dade County Courthouse at 73 W Flagler St., now cramped and in disrepair, was built starting in 1925. Judges, Clerk of Courts Harvey Ruvin and attorneys have been seeking a new courthouse for years, citing inadequacies that can’t be overcome.
Estimates for construction of a new civil courthouse are $361 million and lifecycle costs over 40 years are $227 million, excluding escalation, according to the report.
About $50 million currently available can be used to pay down some construction debt, the report says. Costs for operating the current Miami-Dade County Courthouse are about $3 million per year, the report says, funds that could be applied toward the annual payment required for the debt service and operations of a new courthouse once the existing one need no longer operate.
A request for expression of interest was issued May 8 to identify potential partners, financial structures and best practices to build a civil and probate courthouse for the Eleventh Judicial Circuit of Florida, the Clerk of Courts and related entities.
The expression of interest identified the preferred site and asked responders to incorporate a plan for the future use, lease or sale of the existing courthouse. Responders were encouraged to consider the construction of the new courthouse as well as the manner in which a master developer could use several county-owned downtown real estate assets to contribute to capital requirements in a larger development project. Potential available options were identified as a public-private partnership (P3), joint development business venture, long-term land lease, sale and lease-back, equity partnership and real estate asset swap.
The expression of interest identified the land the county may be able to contribute for a courthouse, including 11 downtown Miami-Dade properties with a total area of a little over 20.4 acres.
Plenary Group MCM, HOK and Johnson Controls Consortium; and Skanska AECOM, and John Laing Consortium provided the most in-depth analyses of the project, the report states. County officials met with both as well as with other industry experts.
According to the report that the mayor provided, feedback from the responses and meetings was:
■Separate the P3 courthouse project from potential real estate development.
■Manage the process with a master developer to coordinate both the courthouse and asset disposition.
■Asset disposition may not cover the full cost to build a new courthouse.
■The real estate development and courthouse construction should be on parallel tracks but funding of the courthouse construction shouldn’t be tied to proceeds from real estate.
■The market supports the county’s preferred site.
■The market is seeking clear direction from the county as to the project’s scope, method of delivery and funding sources.
However, legislation the county commission passed requires a recommendation for a solicitation method or a waiver of competition .A waiver of competitive bidding and negotiations with a respondent to the expression of interest isn’t recommended, the report says, as none provided enough detail about the proposed project to warrant a waiver of competition and sufficient competition exists in the marketplace that would likely end up the best value for Miami-Dade.
County commissioners awarded contracts to architectural firm Perez and Perez Architects Planners Inc. and court planning agency Dan L. Wiley and Associates to prepare the Civil and Probate Courts Master Plan to address current and projected needs of the courts.
Based on the recommendations of the master plan, key criteria of the proposed courthouse include:
■An accessible location downtown near public transportation.
■About 600,000 gross square feet of building area to include secured parking.
■Forty-six courtrooms that could expand to 50 by 2035.
■One jury suite planned for two courtrooms in civil court and one for four courtrooms in probate.
■Two attorney-client privilege rooms per courtroom.
■Standardized courtrooms and judicial office sets.
■Use of nationally recognized judicial system space standards, including one restroom per judge.
■Separate public and judicial/staff circulation.
■A 10,378-square-foot law library.
■An area for food services to serve employees and visitors.
■A single point of public entry for security and weapon screening.
■Modern technology, including systems for recordkeeping, audio/video conferencing, courtroom desktop/laptop use, courtroom audio/video recording and evidence presentation.
The report states that based on a draft by KPMG, the P3 model appears to provide the best value to the county. Compared with a traditional design-build approach, the report says, a P3 accelerates the project by one year, taking four years instead of five.

One Response to Site pinpointed for new civil courthouse in Miami