Advertisement
The Newspaper for the Future of Miami
Connect with us:
Front Page » Transportation » SMART park & ride lot early, 25% under budget 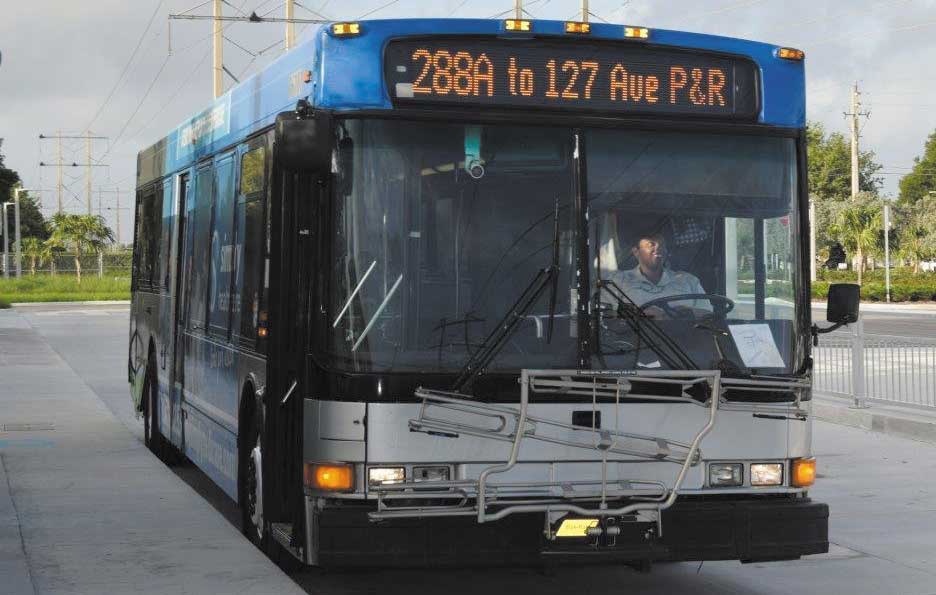 The newest addition to the Strategic Miami Area Rapid Transit (SMART) plan, a park & ride lot at Southwest 127th Avenue and Kendall Drive, has opened 4½ months ahead of schedule and almost 25% under budget.
“Everything fell into place,” said Bobbi Crichton from Miami-Dade Transit’s Marketing and Communications Department at the June 19 opening ceremony. Ms. Crichton attributed the efficiencies to “good weather and a good project manager.”
The $1.5 million lot was built with matching funds from the Florida Department of Transportation and the People’s Transportation Plan surtax on sales after an agreement with Florida Power & Light allowed the Department of Transportation and Public Works to use land under FPL’s service line for the lot. The county commission approved a license agreement between the county and FPL for long-term use in May 2014.
The park & ride lot is within the Kendall Corridor, which runs from the Dadeland area Metrorail stations to Southwest 167th Avenue, connecting western residential areas, employment centers, shopping areas, expressways, schools and Metrorail stations further to the east. About 190,000 persons live within 2 miles of the heavily trafficked corridor.
“Kendall residents are in need of more solutions to alleviate congestion on the roadways,” said county Mayor Carlos A. Gimenez in a press release, “and this new park & ride lot will offer more options and encourage the use of our public transportation – not to mention, this is yet another steppingstone in the SMART plan implementation.”
Ms. Crichton said the new lot “will most likely be at a lower capacity during the summer and pick up once the school year starts.” It appeals to parents because public school children pay half fare. Ms. Crichton says “it is a popular option for school kids because their parents don’t need to worry about them crossing the street.”
The park & ride lot offers transit riders free parking in 161 spaces, including six for riders with disabilities, designated parking for vehicles with baby stroller permits and bicycle parking.
The lot increases total parking for Kendall commuters through park & ride by 70%. The other two locations, the West Kendall Transit Terminal and the Kendall Drive and Southwest 150th Avenue lot, have 65 spaces.
CarlaChristina Thompson with Miami-Dade Transit said “people seem very happy with the lot and are looking forward to more changes.”
The lot will connect riders to the Dadeland North Metrorail Station through bus routes 288 and 288A.
Route 288A started with the opening of the lot as a new short-term service. The new route provides eastbound morning service about every 15 minutes from 5:50 to 9:19 a.m. Westbound afternoon trips leave Dadeland North about every 15 minutes from 3:37 to 7:22 p.m., according to the Metrobus service adjustments. While only route 288A enters the park & ride lot, route 288 serves the bus stop on Kendall Drive and 127th Avenue across the street.
The SMART plan is an infrastructure investment now estimated at $3.6 billion geared to address mass-transit expansion through six new corridors to create a network of transportation options. The plan kicked off in January with the opening of the Dolphin Station Park & Ride lot.