Advertisement
The Newspaper for the Future of Miami
Connect with us:
Front Page » Government » City of Miami bond wish list tops $1.5 billion 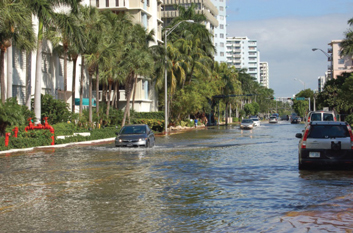 The wish list for City of Miami general obligation bonds has topped out at $1.5 billion – more than a tad over the projected cap of $275 million.
It means officials face tough decisions to trim the wants and needs list to something more realistic.
It appears a large portion of the money may be earmarked for sea level rise mitigation and flood prevention.
Assistant City Manager Fernando Casamayor updated the city commission on the proposal June 22, citing good participation from residents at several meetings on the bonds, which are designed to fund needed capital improvements for the foreseeable future.
Mr. Casamayor said the plan is to have a final proposal ready for commission approval in July so the bond request can go on the Nov. 7 ballot.
Mayor Tomás Regalado says a general obligation bond is under consideration because the city has infrastructure needs of significant magnitude.
Mr. Casamayor said, “We have over a billion and half dollars worth of requests and identified capital needs.”
To generate debate on possible ways to spend funds raised via bonds, Mr. Regalado and Budget Director Christopher Rose listed $275 million in projects.
Mr. Regalado, who is term-limited and in his last year in office, said he’d like the bonds plan to be called Miami Forever.
The mayor has said immediate attention is needed to deal with climate change and sea level rise. The proposed list he presented with Mr. Rose would allocate $100 million to sea level rise mitigation and flood prevention.
The list also includes police and fire equipment and infrastructure, road improvements, workforce housing, citywide park improvements and safety features, community trails and bike paths, and historic preservation.
Commissioner Wifredo “Willy” Gort has suggested a focus on projects with citywide impact.
Jane Gilbert, the city’s chief resilience officer, thanked commissioners June 22 for taking a citywide approach to shoring up vital infrastructure, particularly to prepare for sea level rise.
She said it is a both critical and opportune time to present this to voters as a strategic and forward-thinking investment opportunity, and “the cost of inaction is very high.”
With one of its borders being Biscayne Bay, the city has been referred to as Ground Zero in the battle against rising oceans.
Ms. Gilbert spoke of the tremendous risk the city faces, stating “we have a lot at stake here, with the most exposed assets” – more than $74 billion worth of appraised value lies within storm surge zones.
“We need to demonstrate how we’re going to mitigate flood risk, to keep insurance rates intact,” she said.
Ms. Gilbert said the National Oceanic and Atmospheric Administration reports 17 to 20 King Tide days a year currently but projects they will number about 49 in 2030 and more than 200 in 2045.
She said it’s important for the city to work with the Florida Department of Transportation and Miami-Dade County on infrastructure needs. “And we can leverage other private funders,” she said.
Ms. Gilbert mentioned other resilience issues the city faces, including transportation and affordable housing needs.
“We need a smart, cost-effective, forward-thinking plan,” she said.