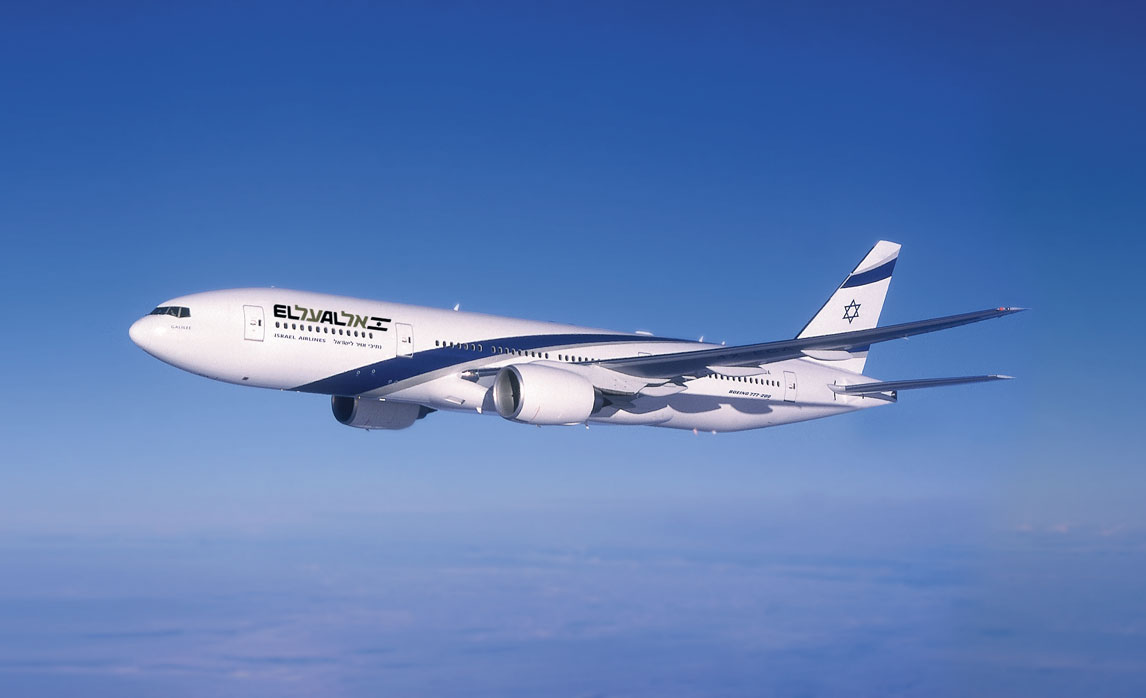 As EL AL Israel Airlines prepares to celebrate what is perhaps the most anticipated passenger airline launch of 2017 at Miami International Airport, airline officials are excitedly witnessing seats beginning to fill fast with passengers from all walks of life.
The big day is Nov. 1, when the airline will see the first of its three weekly nonstop flights to Tel Aviv take off.
Miami International Airport is the sixth destination in North America for the airline and has been courting the airline since at least early 2016.
The flights will be serviced by a Boeing 777, part of a family of the world’s largest twinjets, and accommodate 280 people.
Full class service will be offered – First Class, Business Class, Economy Plus, and Economy Class – and passengers will have their choice among 20 kosher meals, which they can pre-select online prior to their flight.
The airline will also build a premium service lounge in Miami International, similar to other EL AL lounges around the world which host passengers flying in the premium classes and some Matmid Frequent Flyer Club members as well as members of the airline’s King David Club.
The airline is currently waiving the one-time $25 enrollment fee for its Matmid Frequent Flyer Club in the US.
Come November, Miami will be the only destination in Florida and in the Southeast US with non-stop service to Tel Aviv.
And the journey begins long before customers set foot in Israel, said Yoram Elgrabli, managing director of EL AL Israel Airlines, North and Central America.
“When you’re entering the plane in Florida, you’re going to feel like you’re already in Israel thanks to the ambience on the plane – the food, the wine, the entertainment, the flight attendants and pilots, with everything in Hebrew and English.”
Flights will depart from Miami to Tel Aviv at 11 p.m. Saturdays and 1 p.m. Mondays and Wednesdays. Return flights to Miami will depart Tel Aviv at midnight Sundays, Tuesdays and Thursdays.
The airline previously offered the same route before canceling service in September 2008.
“We’re proud to come back to Miami and are very happy and excited about opening this route,” Mr. Elgrabli said. “We know that we have a lot demand.”
“We’re looking forward to having the Hispanic community on the flights, we have the Jewish community, the Israeli community, business people with business in Israel, and Israelis that come do business in Miami.”
Mr. Elgrabli is also excited about using the Miami hub as a way of connecting to South America.
“We know we have demands from Brazil, from Argentina, from all of Latin America,” he said. “And not only in regards to the traffic that originates there, but also with Israelis that would love to do business there.”
“We would love to encourage pilgrims to visit Israel from all of the Christian segments, whether it is Evangelists, Catholics, Protestants, etc. We are already doing well with them, and they are flying to Israel via New York, so people are looking forward to having this route open.”
Airline officials are “strongly considering” creating cruise packages in the future to tap into Miami’s cruise industry.
As for Israelis, Mr. Elgrabli said, they love Orlando for its attractions and Miami for its shopping opportunities.
“Israelis love shopping – they will shop until they drop,” he said, “so I think we have a product that will be popular both in Israel and Miami.”
“There are many valuable segments that we are looking forward to and we’re already seeing now those kinds of segments in the bookings.”
Typically, flights go up for sale one year in advance of flying dates, but EL AL was “so confident about the market and the demand,” Mr. Elgrabli said, that they opened bookings just last month, on May 15.
Currently, the airline is offering a $999 promotional fare for roundtrip non-stop Miami-Tel Aviv flights.