Advertisement
The Newspaper for the Future of Miami
Connect with us:
Front Page » Real Estate » Riverfront revival in Miami targets hotel, convention center 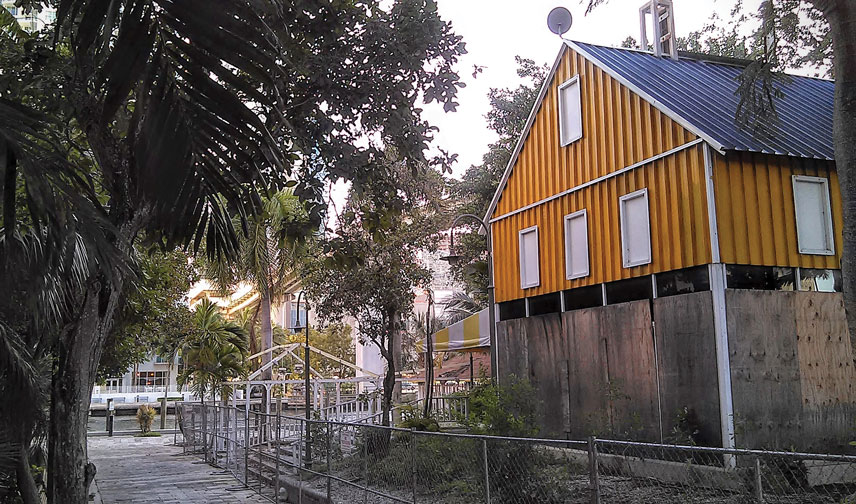 A variety of stakeholders have their eyes set on a riverfront revival in Miami.
These interests are converging now and could lead to a new and vibrant riverfront downtown that could see a revived hotel and convention center, expanded and improved public riverwalk, and a renovated and reopened Fort Dallas Park.
The changes might also encourage the use of water taxis.
The players include City of Miami officials, the Miami River Commission, Downtown Development Authority, Hyatt Regency and the Miami Parking Authority.
The group may include a hotel on private property, River Park Hotel and Suites, hugged on three sides by city-owned land.
Voters in the city may also have a role in this transformation as any lease or sale of city-owned waterfront property must be approved by referendum.
Recent actions by the city commission and the Downtown Development Authority have resurrected interest in the riverfront.
Commissioners voiced approval of the city administration moving forward with negotiations for the proposed redevelopment of the city-owned James L. Knight Convention Center and attached Hyatt Regency hotel, at 400 SE Second Ave.
On April 27, commissioners discussed a proposed memorandum of understanding to be executed by the city manager between the city and Hyatt Equities LLC to negotiate an amended land lease with Hyatt. The new deal would require Hyatt to redevelop the site, which includes the hotel, convention center and a 1,450-space Knight Center garage that is the base of the privately-owned Miami Tower across the street.
Daniel Rotenberg, head of the Department of Real Estate and Asset Management, has said the new deal would include a master plan for the riverfront and could incorporate city-owned Fort Dallas Park at 60-64 SE Fourth St.
The city’s growing public riverwalk connects the Knight Center-Hyatt property with the park, and the River Park Hotel and Suites is sandwiched in-between.
Commissioners questioned Mr. Rotenberg about city attempts to get the private property hotel onboard with a new riverfront development.
He said some discussions had been held but went nowhere.
At its May 25 meeting, after commissioners approved an agreement settling financial disputes with Hyatt, the city commission voted to direct administrators to pursue further talks with the River Park Hotel and Suites.
River commission members have for years pressured the city to clean up and reopen the city park. River commission members learned in the past month that the city has hired a firm to assess what work is needed to repair The Flagler Worker’s House, also known as Palm Cottage, which is listed on the National Register of Historic Places and is a key component of the park.
The park has been neglected and fenced off for years. It’s home to several structures, including a former seafood restaurant and the Flagler house.
City officials said the historic house will be repaired and the park might reopen.
City Commissioner Ken Russell has said he’d like to see a master plan of the downtown riverfront that preserves Fort Dallas Park, maximizes green space and activates the area.
The neighborhood is in Mr. Russell’s district, and he heads the development authority’s board.
The city recently requested qualified property managers, operators and promoters to note their interest in obtaining a long-term lease at Fort Dallas Park.
The request seeks information from parties interested in leasing park property long term to establish a restaurant. The request says the project shall include an educational component.
The document points out, “This is not a Request for Proposals, but a Request for Information, solely to gather information to assist the city in determining whether there are interested respondents who are willing to plan, renovate, build-out, and manage a waterfront restaurant, paid for with respondent’s private funding.”
The city wants the responses by 4 p.m. June 30. If interest is shown, it could lead to a new formal request for proposals.
The park’s high-profile site is adjacent to the county’s Riverwalk Metromover Station and has existing city dockage.
The public riverwalk could get a boost in funding from a general obligation bond proposal being considered now.
The Downtown Development Authority’s board recently placed the riverwalk on its wish list of projects it would like to see get funds from the anticipated $275 million general obligation bond issue, if approved by voters this fall.
Among priorities on the authority’s wish list are Baywalk and Riverwalk, waterfront open spaces for pedestrian and cyclists ($25 million); a Brickell tunnel under the Miami River ($20 million); and development of two docking areas for waterborne transportation ($2 million).