Advertisement
The Newspaper for the Future of Miami
Connect with us:
Front Page » Communities » Drive on to reopen lane of Brickell Avenue Bridge

Drive on to reopen lane of Brickell Avenue Bridge 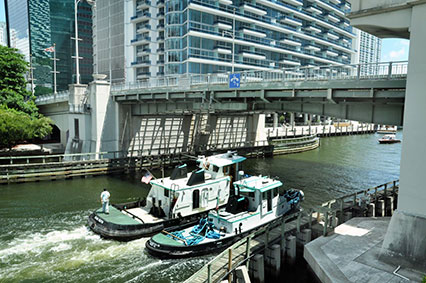 Officials with the Miami River Commission want the Florida Department of Transportation to restore one northbound lane of traffic to the Brickell Avenue Bridge.
This is just one of a dozen ideas assembled by the commission to keep cars moving on Brickell Avenue and keep ships moving on the Miami River.
River commission members and others are working toward balancing these competing interests.
The state transportation department removed one lane of northbound traffic in a redesign of traffic patterns a few years ago, on a temporary basis, for public safety reasons.
While state officials don’t seem eager to return the lost lane, river commission members continue to push for its return.
That and a host of other suggestions were discussed recently by the river commission’s Urban Infill and Greenways Subcommittee.
The Brickell Avenue Bridge is a very important bridge on a major transportation corridor, where road transportation and water transportation intersect, said Jim Murley, committee co-chair.
When the bridge is up, road traffic snarls and downtown and Brickell businesses are impacted. When the bridge is down and ships are awaiting a scheduled opening, it impacts the marine industry.
Mr. Murley said the bridge’s designer couldn’t have foreseen what downtown Miami would be today.
“The river corridor will always undergo changes,” said Mr. Murley. “There will be more cars, more recreational boats, more freighters … it is an ongoing process.”
For some time, river commission members have been trying to work with the state transportation department, which is responsible for the street, and the US Coast Guard, which is in charge of the bridge operation as the river is a federal navigable channel. Those talks have included other City of Miami officials, along with the Downtown Development Authority.
State transportation department officials, including Ramon Sierra, were at the committee meeting.
Mr. Sierra agreed a lot of competing interests are involved and it’s important to work toward a balance.
He handed out copies of a transportation department traffic analysis of the Brickell Avenue Bridge.
The study is tied to a proposal by the department to have one less bridge opening in the morning rush hour and one less in late afternoon, which would keep cars moving but affect shipping.
The transportation department requested the change of the Coast Guard in May 2016. The Coast Guard wanted a traffic study.
A summary of the study showed the proposed changes would increase hourly volume 9% in the morning and 38% in the afternoon, said Mr. Garcia.
The Miami River Marine Group has been critical of the study, saying it has inconsistencies, omissions and misleading results.
Mark Bailey of the marine group reiterated those concerns at the committee meeting and said the idea of two fewer bridge openings – for river vessels – is “short-sighted and misguided.”
Mr. Bailey expressed his support for a May 18 editorial by Miami Today Editor and Publisher Michael Lewis.
The editorial recommended the city police department create a traffic enforcement squad to enforce existing traffic laws and write tickets for cars blocking intersections and traffic lanes associated with the bridge.
The river commission earlier assembled a Brickell Bridge Action Items list, which included uniformed officers on and near the bridge.
The action item suggests installing pedestrian gates and employing “white glove” security officers to reduce unnecessarily long openings created by pedestrians who insist on continuing to cross the bridge after the warning signals light up, thus creating longer auto traffic delays.
Currently the first operational step in opening the bridge for a vessel is closing the vehicular safety gates to stop traffic. After the gates close and before the bridge opens for the vessel, numerous pedestrians and bicycles knowingly go beneath or over the closed safety gates and cross the bridge because they don’t want to wait a few minutes for an opening, and in doing so put themselves at risk, according to the river commission.
This happens during the majority of bridge openings, and the bridge tender, who must remain in the bridge house, tells violators over a loudspeaker not to cross the bridge which is about to open, but they continue to cross regardless.
“The actual time needed for the bridge to be open for the vessel to pass could be equivalent to a long red light, but the dangerously crossing pedestrians and bicycles are doubling the time the cars are stopped for a bridge opening, therefore essentially doubling the resulting vehicular traffic,” the action list says.
The action plan also suggested: “Do not allow hotels on the north side of Brickell Bridge to illegally block vehicular traffic lanes in the street for ‘Valet Parking’, which eliminates two needed vehicular lanes and forces all traffic to merge into only one vehicular lane, which creates traffic jams.”
Ernie Martin, river commission member and committee co-chair, thanked the transportation department for its study.
“The reality is: downtown is clogged with traffic and the river is clogged with marine traffic,” said Mr. Martin. “We all know the real solution is something like a tunnel.”
The idea of boring a tunnel under the river to keep traffic flowing on Brickell Avenue to and from downtown continues to attract the spotlight.
On the heels of a January decision by the Downtown Development Authority supporting a Brickell Avenue tunnel, the river commission approved a resolution in March supporting the concept.
The next step for river commission members is to have a face-to-face with the Coast Guard. A scheduled meeting in June had to be cancelled and now they’re trying to schedule a meeting in July.