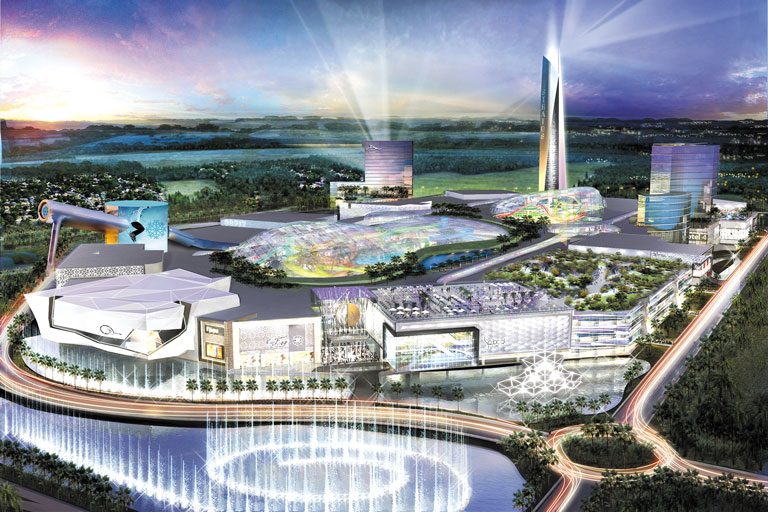 The backers of the American Dream Miami mega-mall in Northwest Miami-Dade County predict that the County Commission will approve their concept in October, said Robert Gorlow, an attorney for the complex.
He and Edgar Jones, a development consultant for the entertainment and shopping mall, spoke at Friday’s meeting of the Realtors Commercial Alliance, part of the Miami Association of Realtors.
“The county thinks we’re going too fast, but they’re okay with it,” Mr. Gorlow said. “We want to move fast, because plans get stale otherwise.”
Though some individuals have concerns, the county commission and several neighborhood groups have given it their preliminary approvals, he said.
The $4 billion project is set to open in 2022-23, Mr. Jones said. It’s been in the planning stages since 2013 and comprises 7.2 million square feet that are to include restaurants, stores, 2,000 hotel rooms, a walk-through aquarium, an indoor ski slope, water park, movie complex and more.
It is a project of Triple Five Worldwide, which also developed the West Edmonton Mall in Canada and Mall of America in Bloomington, MN. In about 18 months, Triple Five Worldwide will open American Dream Metropolitan New York in the New Jersey Meadowlands, Mr. Gorlow said.
It’s estimated that American Dream Miami will receive 40 million annual visitors and create 14,500 permanent jobs. The developers have agreed to add two highway interchanges that will open three years before the mall does, and a major transportation center has been included in the project, Mr. Gorlow said. “We applied to [the Florida Department of Transportation] two years before we applied to the county,” he added.
The parking garages are designed so that they can be converted to other uses if cars become outmoded. The mammoth project is also designed for sea-level rise, driverless cars and other trends, he said.
“It was hard to put together 80 acres,” Mr. Jones said, some of which was owned by the state, Miami-Dade Public Schools, the Graham family and private owners. He gave Mr. Gorlow credit for pulling the deal together.
Most of the opposition to the project, Mr. Gorlow said, has come from owners of older, more traditional malls who don’t want to compete with American Dream’s entertainment options, which might end up comprising 60% of the project.