Advertisement
The Newspaper for the Future of Miami
Connect with us:
Front Page » Top Stories » New fire station in works in downtown Miami 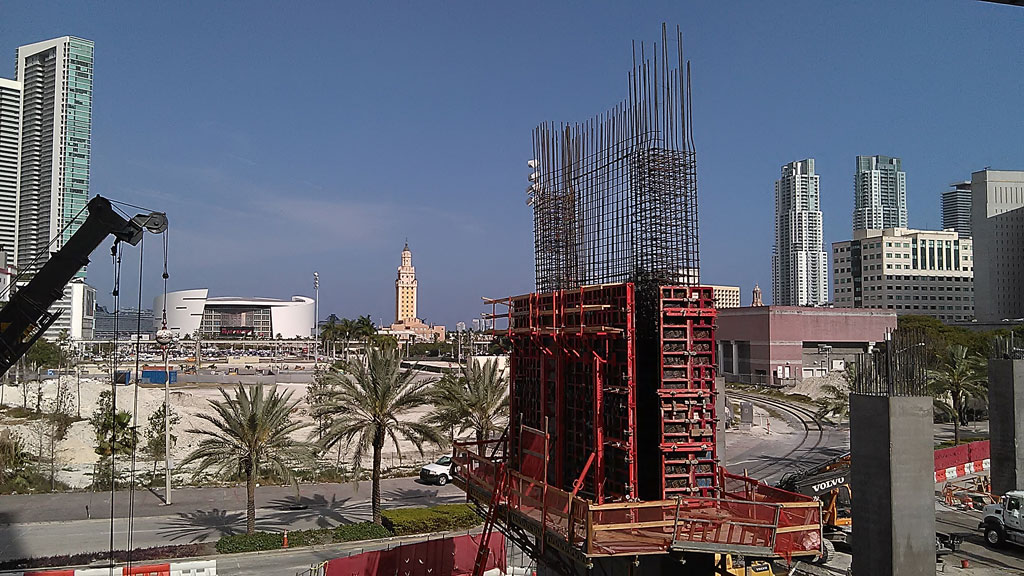 A new fire station in the heart of downtown Miami is in the works to possibly replace Station 1 at 144 NE Fifth St., the city’s oldest firehouse.
City commissioners are today (4/27) to consider buying 13 NW Sixth St., in the shadow of the former Miami Arena site, with the intent to develop a new fire station.
The station would be next door to Miami Worldcenter, MiamiCentral transportation hub with Brightline and Tri-Rail passenger train service, and the Marriott Marquis Miami Worldcenter Hotel & Expo Center.
The resolution would authorize the city manager to execute a purchase and sale agreement between the city and AT&T Communications Inc. to acquire land on Northwest Sixth Street for $3.45 million.
The purchase is contingent upon the city getting two written appraisals from licensed appraisers confirming that the value of the property is at least the stated purchase price.
If approved, the resolution would authorize the city manager to negotiate and execute all documents and allocate up to $3.537 million from a source to be determined to cover the acquisition, including the cost of survey, environmental report, title insurance and closing.
A background memo says that pursuant to an October 2015 commission action, the city will acquire title to the parcel abutting 13 NW Sixth St.
“The purchaser plans to assemble the property containing 10,586 square feet along with 20,468 square feet of Parcel 3 to develop a new City of Miami Fire Station. The total size of the property and Parcel 3 is approximately 31,054 square feet,” the memo says.
In October 2015, Miami Today reported about a land swap between the City of Miami and an affiliate of All Aboard Florida that could one day lead to a new fire station.
The commission approved an agreement with FDG Rail Holdings 25 LLC and AAF Miami TOD Holdings LLC. It involves a land exchange of two city-owned properties, about 0.18-acre and about 0.32-acre, for FDG-owned property, about 0.50-acre at 435 NW First Court.
All Aboard Florida will also pay the city $500,000 and “shall be granted certain crossing rights to allow AAF to use that certain portion of NW 8th street including subsurface and air rights,” says the agreement.
This was to aid the company in construction of the new MiamiCentral train station and related development, currently under way.
At the time, City Manager Daniel Alfonso said staff was working with AT&T to get more land nearby for a fire station to replace Station 1.
In summer 2016, commissioners rezoned land under Station 1 to make it even more appealing for sale.
The land use designation was changed from Major Institutional, Public Facilities, Transportation, and Utilities to Central Business District. And the site was rezoned from Civic Institutional to Urban Core Transect Zone – Open.
Planning Director Francisco Garcia had said the site is in the urban core and the proposed changes are to make it available for sale-development.
A potential buyer for the site could be Miami Dade College’s Wolfson Campus, which hugs the city’s land on two sides. The two-story fire station is on Northeast Fifth Street between Northeast First and Second avenues.