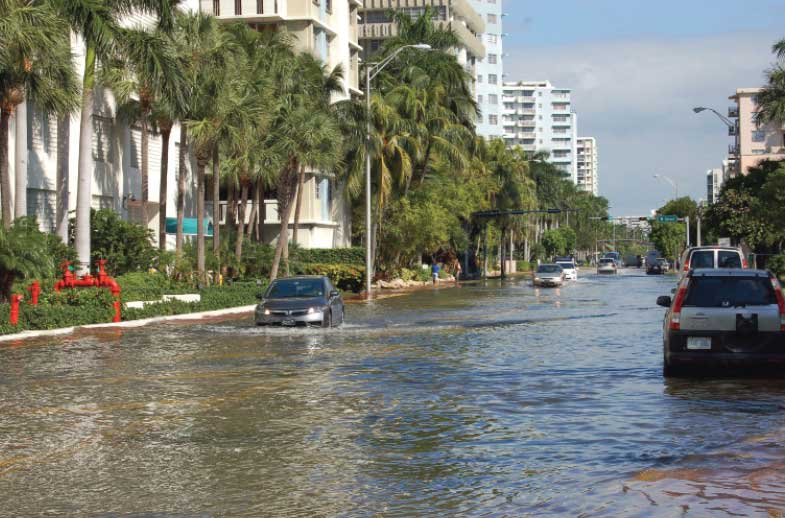 The City of Miami has formally joined the Southeast Florida Regional Climate Change Compact as a municipal partner, and has endorsed a climate action pledge.
The move marks the city commission’s support for the compact, and its promise to consider implementing the Regional Climate Action Plan.
The resolution was sponsored by Mayor Tomás Regalado and approved by commissioners March 23.
The Southeast Florida Regional Climate Change Compact was executed by Broward, Miami-Dade, Monroe, and Palm Beach counties in January 2010 to coordinate mitigation and adaptation activities across county lines.
Community leaders in the compact say it represents a new form of regional climate governance designed to allow local governments to set the agenda for adaptation while providing an efficient means for state and federal agencies to engage with technical assistance and support.
Resident Linda Alger spoke in favor of the city joining the compact, saying sea level rise is a very important issue.
“The city is at major risk. Sea level rise is continuing and we are set to be at ground zero. We need to adapt or retreat,” she told commissioners.
Hopefully, the city joining the compact “will give us some power,” Ms. Alger said, and serves as an example to others.
Ms. Alger said more than 30 municipalities have joined, including South Miami. The list includes other adjacent neighbors including Coral Gables, Miami Beach, Hialeah and Key Biscayne.
Mayor Regalado’s resolution says Florida is considered one of the most vulnerable areas of the country to the consequences of global climate change, with Southeast Florida being at the frontline to experience the impacts of a changing climate, especially sea level rise.
Miami is generally at sea level and abuts Biscayne Bay, the Miami River and Little River along a considerable length of its borders, and sea level rise will have broad impacts related to the city’s infrastructure, storm surge, public health, insurance rates, the availability of potable water and socioeconomics, the resolution says.
The city must adapt to and mitigate the adverse effects of sea level rise and other climate-related impacts within its jurisdiction, it says.
In November 2016, the city’s Office of Resilience & Sustainability and the city’s departments of planning and zoning, public works, and capital improvements participated in the compact’s third annual Resilient Redesign Workshop in partnership with the University of Miami’s School of Architecture to identify adaptations necessary to reduce the risk, damage, and economic losses associated with climate change for the highly flood-vulnerable Shorecrest neighborhood.
In January, the city’s Sea Level Rise Committee recommended that capital projects be developed with considerations made for anticipated sea level rise using the US Army Corps of Engineers High or National Oceanic and Atmospheric Administration High curve calculator for sea level rise projections, which are included in the compact’s 2015 Unified Sea Level Rise Projection Report.
In February, the committee unanimously passed a resolution recommending that the city formally join the compact, endorse its Mayors’ Climate Action Pledge, and affirm support for the Regional Climate Action Plan.
The National Aeronautics and Space Administration Jet Propulsion Laboratory has reported the average global sea level has risen almost 3 inches between 1992 and 2015 based on satellite measurements. Sea level rise in South Florida has been of similar magnitude over the period (NOAA, 2015) but is anticipated to outpace the global average due to ongoing variations in the Florida Currents and Gulf Stream.
In the short term, sea level rise is projected to be 6 to 10 inches by 2030 and 14 to 26 inches by 2060 (above the 1992 mean sea level).
In the long term, sea level rise is projected to be 31 to 61 inches by 2100, according to a 2015 unified sea level rise projection report from the compact.
The projection report is for use by the climate compact counties and partners for planning purposes to aid in understanding of potential vulnerabilities and to provide a basis for developing risk informed adaptation strategies for the region.
Details: www.southeastfloridaclimatecompact.org