Advertisement
The Newspaper for the Future of Miami
Connect with us:
Front Page » Transportation » Small changes with big payoffs for transportation jams 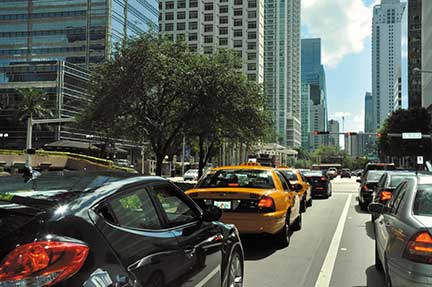 While the multi-year Strategic Miami Area Rapid Transit plan moves forward, the county’s Transportation and Public Works Department has launched a campaign to create small changes with big payoffs.
“Miami-Dade Transit is really pushing the envelope, trying to be innovative, coming up with interesting ways to improve the daily experience of transit,” Charles Scurr, executive director of the Citizens Independent Transportation Trust, told board members at a March 16 meeting.
The county’s transit department wants to see “what are some innovative, out-of-the-box kind of ideas for improving that experience,” he said, and one of its partners is Tony Garcia, a transit consultant and board member of the Green Mobility Network.
“I’m here because we recently won a grant for $150,000 from a New York-based nonprofit called Transit Center,” Mr. Garcia said. The money will enable the Street Plans Collaborative to give small transit grants to citizens and cities for improved access to transit, he said.
“It could be a bike lane, or a bus stop improvement. These are very low-cost, short-term improvements – they’re not meant to be the final version – but things we can all accomplish right now while longer-term improvements take place,” Mr. Garcia said.
In a strategy he called “tactical urbanism,” a program of small improvements that can be completed quickly and inexpensively acquaints people with the concept of getting around without using a car.
“In my practice, I’m coming up against a constituency of people who are not quite ready for the type of infrastructure that we’re trying to pursue,” he said. “So we have to find ways to convince people and elected officials that that this is a good idea; that progressive, multi-modal transportation is in their best interests. At least here in Miami-Dade County, this idea but hasn’t really taken hold.”
But Mayor Carlos Gimenez and the county commission have made transit a priority, he said, which created an opening for this type of program.
In Miami-Dade, 25% of the population lives on 6% of the land. And in condo-intense communities like Aventura and Sunny Isles, 45% of the population occupies 15% of the land area, he said.
“This is not the old Dade County anymore,” he said. “We’re in a new urban place, but our transportation isn’t there. We need fast solutions.”
The Street Plans Collaborative is holding a contest for citizens and cities to submit ideas until May 1; the winners will receive small grants, a site design, budgeting and permitting assistance, help with marketing and with finding people to do the work, the services of a transit advocate, and assistance with procuring materials, Mr. Garcia said.
“Anybody in the county can apply for projects that we can do on our own. We’re going to out there,” he said. “We’re not hiring anybody to do this work. We’re going to go out there and paint the ground with bike lanes and actually build the infrastructure ourselves. We can do a crosswalk for $200. It doesn’t have to be a big deal; it’s something we can do right now.”
Successful projects should be based on an approved mobility plan, be intended to be permanent, have municipal or community support, and be eligible for scale-up (that is, a municipality or the county can expand upon it after the program is done), he said.
“We’re looking for a partnership,” Mr. Garcia said. “We can accomplish a lot. Everything is a lot easier than you think.”

5 Responses to Small changes with big payoffs for transportation jams